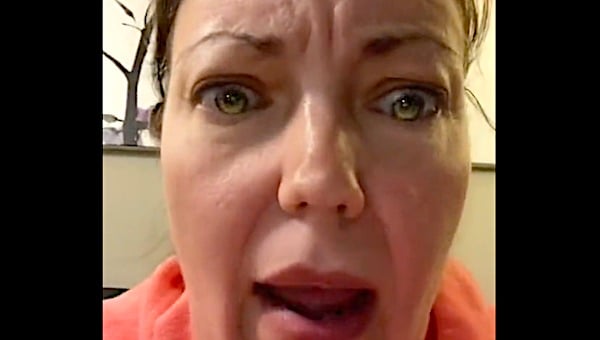 A self-described human-resources recruiter has been placed under review by the organization regulating the profession after posting a crazed rant online in which job seekers and job holders both were threatened.

Officials with the Human Resources Professional Association they are aware of the video posted one of its "regulated members."

It said it does not "condone or endorse in any way the statements made in the video," and it is "reviewing this matter to determine if there has been a breach of its Rules of Professional Conduct."

It is BizPacReview that highlighted the video which was re-posted by columnist Glenn Greenwald.

Editor's note: Be aware of highly objectionable language throughout:

This is the President of Hellpic.twitter.com/7RN1cZZPbE

Greenwald called her the "President of Hell," and BizPacReview bluntly warned this "hateful leftist HR job recruiter" was putting her ideological foes "on notice in "CREEPY" video."

"The bizarre rant comes from north of the border in Justin Trudeau’s Canada, a nation where many have been driven mad by COVID and their preening leftist leader’s demonizing of those who dared to speak out against his draconian lockdowns and restrictions as white supremacists and racists, turning millions of Canadians into enemies of the people in the eyes of their fellow citizens," the commentary explained.

"It is astonishing that anyone, let alone an HR recruiter, would post such a brazenly fascistic diatribe on social media. Perhaps she was under the influence or is mentally disturbed or a combination of both but by doing so, she has done a great service by laying out what countless others in similar positions to hers probably think but would never openly admit," it said.

The woman, later identified as Tammy Sepetis, targets those who aren't "woke" and her comments include: "But since you seem to forget that and you’re all loud and proud with your big thoughts and your big ideas and you want to whatever, set up f-----’ hot tubs in Ottawa, I’m a recruiter."

Her face repeatedly contorts into an image of sheer ferocity.

"It’s a small, small, small industry, smaller than you think, same with HR. So, if you’re looking for a job, or maybe trying to keep a job, maybe, just maybe, think about what you’re putting on social media. Again, freedom fighters, I know you’re not really big with stats, and you know, facts aren’t your thing you know, but, what I can tell you, what is a fact, is that recruiters talk and recruiters, like the majority of Canada don’t agree with you. Do you know what that means? Do you have any guesses, any guesses what that means? What that means is that if you need a job, you might not get one. If you want to keep a job, you might not get to do that."

She talks about firing people and working to make sure it's "with cause" so any compensation in minimal.

"Recruiters are watching, HR is watching, everywhere, and we hate you. We hate you so much. And you think we can’t do anything, but we can. We have the power, always, remember that, it doesn’t matter if there’s a f-----’ man at the top of your HR department, it’s run by women and it’s run by angry women just like me."

At that point she's using a stage whisper, much like the one Joe Biden has used many times in speeches.

HRPA is aware of this video post by one of its regulated members and does not condone or endorse in any way the statements made about HR practice therein.Further, HRPA is reviewing this matter to determine if there has been a breach of its Rules of Professional Conduct.(Part 1/2)

"This woman is in desperate need of a straitjacket and a padded cell," one wrote.