A study released ahead of a Supreme Court ruling that could overturn the Roe decision finds an increase in abortions performed in the United States after 30 years of decline.

The number of abortions performed as well as the rate of the abortions increased between 2017 and 2020, according to the pro-abortion Guttmacher Institute.

The reversal, the institute says, underscores that "the need for abortion care in the United States is growing just as the U.S. Supreme Court appears likely to overturn or gut Roe v. Wade."

Guttmacher's Abortion Provider Census, which the organization touts as "the most comprehensive data collection effort on abortion provision in the United States," indicates there were 8% more abortions in 2020 than in 2017. 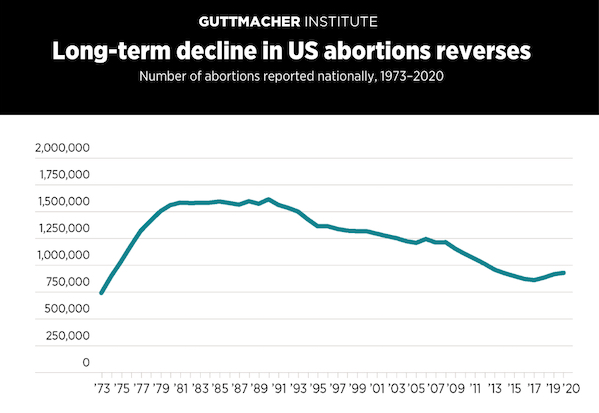 The Supreme Court released six decisions on Wednesday, but the closely watched Mississippi case, Dobbs v. Jackson Women’s Health Organization, was not among them.

The case challenges a Mississippi law that bans all abortions after 15 weeks, except in medical emergencies and fetal abnormality.

In May, a draft of the majority opinion that would overturn Roe and 50 years of court rulings that prevent states from banning abortion was leaked.

As many as 26 states are certain or likely to ban abortion if Roe is overturned.

Guttmacher opined: "An increase in abortion numbers is a positive development if it means people are getting the health care they want and need. Rather than focusing on reducing abortion, policies should instead center the needs of people and protect their right to bodily autonomy."