I know crazy-high statistics seem to accompany everything today from gas prices to the inflation of a host of other commodities. At this point, we can get numb to them. However, the statistics that are lately piercing the hearts of my wife, Gena, and I are the fentanyl overdoses among young adults and adolescents.

Once upon a time, it seemed that illegal drug usage and addiction couldn't get any worse than with the synthetic stimulant crystal methamphetamine (meth) or especially heroin, an opioid made from morphine. Then stepped in another synthetic opioid, fentanyl, which is 50 times stronger than heroin and 100 times more potent than morphine!

ABC News reported, "According to the DEA, the number of forensic drug reports testing positive for fentanyl has skyrocketed in recent years from under 20,000 in 2015 to 117,045 in 2020. A recent study from the National Institutes of Health found that the number of individual fentanyl pills seized by law enforcement increased nearly 50-fold from the first quarter of 2018 to the last quarter of 2021."

Fentanyl overdoses are soaring across all ages and racial lines, with dramatic increases in black, Native American, Alaska Native and Hispanic communities across the nation. It's heart-wrenching to know that a record-breaking number of Americans died from this synthetic opioid, estimated at 105,752 overdoses in just the 12-month period ending October 2021. More than 100,000 needless deaths, and the ages are getting younger all the time.

Even the Centers for Disease Control and Prevention confessed:

The Voice of America reported: "Over 100,000 people died in the U.S. from drug overdoses in the 12 months between June 2020 to May 2021, according to the latest data from the Centers for Disease Control and Prevention. That figure is more than COVID, and more than twice the number of those killed by guns and traffic accidents." (Watch this 2022 VOA Special Report on the epidemic of fentanyl use and overdose.)

In the article, "The rising homicide rate in D.C. is nothing compared with what fentanyl is doing," the Washington Post reported: "But in 2020, opioids claimed more than twice the 198 lives that gunfire did in the nation's capital."

"It's the sixth year that drugs have killed more people than guns. City records show the trend began in 2014 and held steady even as gun violence surged; so, too, did the age of those dying of an overdose."

And Washington, D.C. is not alone.

The Post explained, "The graying of overdose victims is happening across the nation, not just in D.C. In 1999, 518 Americans 55 and older died in opioid-related overdoses. That number rocketed to 10,292 deaths in 2019, according to a Northwestern Medicine study published last month in the Journal of the American Medical Association. That's roughly the same number that die in drunken-driving deaths in the United States each year."

Regarding younger and future generations, fentanyl is now the No. 1 cause of death for Americans ages 18 to 45, surpassing suicide, COVID-19 and car accident-related deaths. Please read that again.

What's crazy is how those tragic figures parallel in adolescents. A new study by the CDC echoed the findings: "The study found that deaths from opioid overdoses in teens ages 14 to 18 increased by 94% between 2019 and 2020 and by an additional 20% between 2020 and 2021.

Safe and In Recovery.com explained the exponential risks for teens who use these highly addictive drugs: "Teens who abuse fentanyl and other opioids are also at increased risk of engaging in other types of dangerous behavior. They are five times more likely than other teens to attempt suicide, drive drunk, get into fights, carry guns or other weapons, or engage in risky sexual activity."

Tragically, most American parents are completely unaware clandestine dealers are using social media to entrap their kids by offering these powerful drugs to them for cheap. And dealers are using innocent emojis to sell fentanyl doses in literally seconds online to millions of teens.

"It's pretty scary what you can go online and have shipped to your house pretty easily," said Steve Carleton, clinical director of Gallus Medical Detox, which has seen more teen patients arrive recently.

Channel 7 News in Denver reported, "The transaction starts with advertising on apps like Instagram or Facebook, public platforms where dealers will post suggestive emojis looking for customers. After a connection is made, the seller and buyer will transition to more secretive apps where messages either delete after sending or come encrypted to discuss the terms of the transaction. After that, payment is sent, drugs are shipped, and within minutes, the deal is done.

"A recent study published in the Journal of the American Medical Association (JAMA) shows between 2019 and 2021, the number of teens who died from fentanyl increased from 253 to 884. Many of those fentanyl-laced drugs were purchased over clandestine social media apps like TikTok, Snapchat, and Wickr."

The added complexity for kids is the covert nature of fentanyl's marketing and street access. Alberta's "My Health" explained:

Drug dealers often sell fentanyl as fake oxycodone. Buyers may think they're getting oxycodone, but they're getting another opioid drug that has fentanyl and other substances in it. On the street, these drugs have nicknames like:

It's time to wake up your parental friends. It's a fact: Rates of fentanyl fatalities doubled among teens during 2020, and easily-accessed laced pills purchased on social media are to blame.

Do you really know what your kids are doing on social media? Do you know the predators preying on them right now? Watch this helpful exposé about kids, fentanyl and social media.

It's also time to wake up our federal and state representatives to do far more in waging the war against this opioid mass killer. I'm talking about stopping it before it gets into this country.

You'd think with fentanyl's exponential potency and the astronomical rise in numbers of overdoses, the feds would pull out every stop to arrest its proliferation in our society, but they do the contrary. The truth and crying shame is that the feds are aiding and abetting the deaths of hundreds of thousands of Americans from this synthetic opioid by opening the floodgates for its import at our southern border.

This single fact should deploy the full resources of the United States government to secure our borders: Mexico is now the dominant source of fentanyl (and meth) being trafficked into the U.S., and China is Mexico's biggest partner in crime (with India a close second) supplying the drug's chemical ingredients and precursors, according to a declassified 2020 DEA Intelligence Report.

As the DEA reported, "Unlike cocaine and heroin, which come from plants that have a growing season and a limited production timeframe, fentanyl can be made on demand and in a seemingly unlimited supply by ordering chemicals and mixing them together in labs. It is easier to make, easier to obtain, and easier to transport and mix in any drug."

Look at these few headlines from just this past week:

Check out this DEA flow chart of fentanyl into the U.S.: 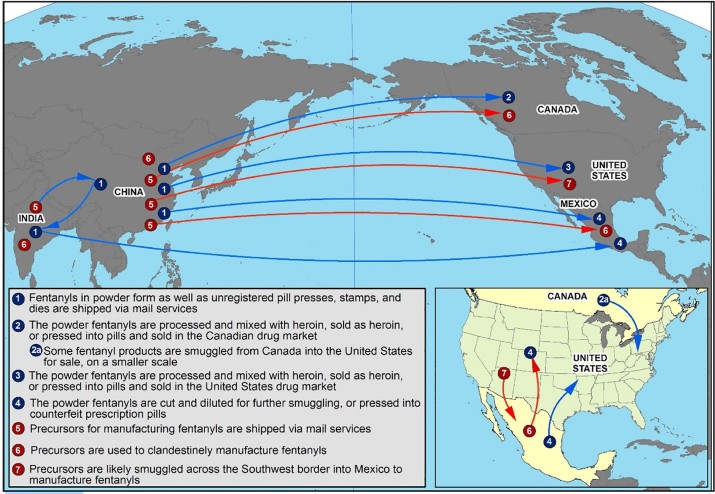 If the majority of fentanyl is smuggled into the U.S. via Mexico, how can any concerned American be soft and weak on border patrol? Isn't 100,000 dead Americans in a single year enough incentive for the feds to continue to build a border wall or post military personnel at hots spots for illegal crossings and contraband?

If a faulty lock on the backdoor of your house was responsible for repeated intruders, theft and even murders in your family, would you not do more to secure it? It's a no-brainer!

While the majority of progressive Democrats decry AR-15s in hope of reducing school shootings, they help fentanyl mules cross our borders at record paces by promoting open borders and illegal traffic. They call COVID an epidemic and unleash a barrage of combatants to control it and people; the CDC also calls fentanyl "an epidemic," yet progressives' actions expand its growth and use. 45,000 Americans died from gun violence in 2020; 69,000 died from overdoses in the same year (and 106,000 in 2021!). It's so hypocritical!

Sadly, the number of fentanyl fatalities will continue to soar for one reason. As NPR reported, Mexican cartels are increasing their production of fentanyl and meth right now because it's so easily carted into and sold in our country.

It's exactly because the feds and our state representatives won't do more to protect our borders and communities from the fentanyl epidemic that we must.

Countless innocent families have been victims of this epidemic by merely sticking their heads in the sand, and then sending their kids off to play on their unmonitored social media or "innocent gatherings of their friends," where it literally takes one use of "beans" or "apples" to get them hooked. Myriad kids are right now being solicited and accessing fentanyl-laced pills through their social media. Could it be your loved ones?

Please, for the future of your family and our nation, talk to the teens in your sphere of influence about the epidemic and fatal dangers of fentanyl. Understand the emoji drug code and how dealers are using cloaked identities to solicit your kids.

If you are or suspect someone you know is using or addicted, seek help and intervention immediately. Here are seven signs of fentanyl addiction to watch for.

Chuck Norris
Chuck Norris is the star of more than 20 films and the long-running TV series "Walker, Texas Ranger." His latest book is entitled The Official Chuck Norris Fact Book." Learn more about his life and ministry at his official website, ChuckNorris.com.
Poverty a 'death sentence'? Not in America!
The new Miss Universe learned karate under me
Online sexual predators target our kids – learn to fight back!
Biden's bonkers & blind-as-a-bat first border visit
This New Year's resolution can make you healthier & happier
See more...