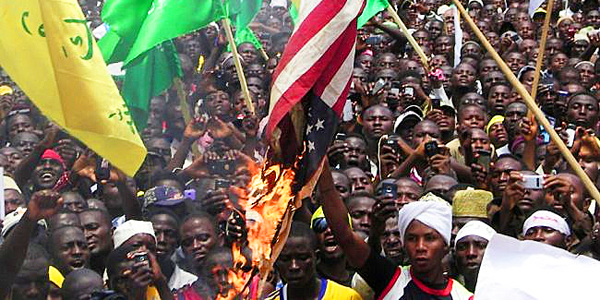 (SARAH WESTALL) – You will not see this in the U.S. media, but Nigeria, the most populous nation in Africa with 217 million people (and growing over 2.5% a year), is devolving toward chaos. Boko Haram and other Muslim factions are warring against what they regard as infidels, including Christians and adherents of indigenous religions.

The federal government of Nigeria has undertaken various measures to try to unify the Muslim North with the largely Christian South, including the construction of a new capital city, Abuja, in the center of the country. It also has created a system of Federal Government Colleges (FGCs), also called Federal Unity Colleges, which are actually secondary (high) schools, "to guarantee national integration and national building among Nigerian children if given the opportunity at a very tender age to live, learn and play together in ideal education environment as provided ab initio by the Federal Unity School established in the 1970s and 1980s."

But the dreams of unifying this large and important nation are turning very sour in the face of a rising tide of Muslim violence, as well as government incompetence and corruption. In the capital city of Abuja, things have gotten so bad that the safety of students in the FGCs of Abuja cannot be maintained, and so the government is closing them down and sending students home.