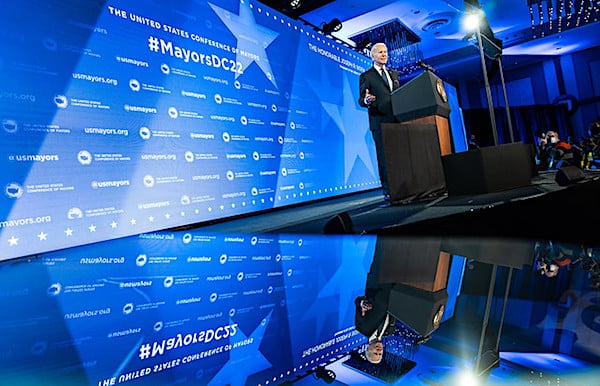 Joe Biden has jumped at his opportunity to return the United States to a program that promotes "hate" against Israel – and funds it too.

Bassam Tawil, a Muslim Arab based in the Middle East, has explained at the Gatestone Institute that Biden now is giving more U.S. taxpayer money to the United Nations Relief and Works Agency for Palestine Refugees.

That's the organization that, in its school books, incites violence against Israel and seeks to erase the Middle East democracy from the map, he said.

"This means that US taxpayer money, thanks to the Biden administration, is now once again going directly to an international agency that promotes messages of hate against Israel and denies its right to exist," he explained.

But there's a lot of negative to the move, Tawil explained.

"Instead of helping the 'refugees' move on with their lives and seek a better future for themselves and their children, UNRWA will continue to encourage them to remain in refugee camps by providing them with various services, including education and healthcare. Why would any Palestinian want to leave a refugee camp when he or she is receiving free education and healthcare?" he charged.

A statement from there said, "The United States believes that Palestinian refugees deserve to live in dignity, to see their basic needs addressed, and to have hope for the future."

The report said Biden revealed he was giving another $201 million to the organization to keep delivering services to refugees in the Middle East.

"These services provided directly contribute to maintaining regional stability, which is beneficial to the interests of the United States, our allies, and our partners. This contribution cements the United States' status as UNRWA's largest donor. These new funds bring the total United States assistance to UNRWA during the Biden Administration to more than $618 million," the White House noted.

But Tawil explained the claim UNRWA contributes to regional "stability" is not just false, but ridiculous.

He pointed out for 70 years the agency has been giving refugees food, medicine, health care education and housing, and all of those projects "certainly did not contribute to easing tensions or preventing violence in the refugee camps in particular or the region in general."

To the contrary, he explained, the refugee camps actually have turned into "hotbeds for extremist and terrorist groups and individuals, especially in the West Bank, Gaza Strip, Lebanon and Syria. The refugee camps in these areas have produced countless terrorists who were responsible for the killing of thousands of Israelis and Arabs alike."

In 1987 and 2000, those camps "played a major role in the two violent uprisings that erupted against Israel," he said. "The camps in Lebanon and Syria have similarly played a significant role in the civil wars that broke out there in the mid-70s (Lebanon) and early 2011 (Syria)."

All of those actions came under the administration of the UNRWA.

The problem is especially significant in schools, where, a study found, kids are given lessons on "violence, martyrdom, overt antisemitism, jihad (holy war), rejection of the possibility of peace with Israel, and the complete omission of any historical Jewish presence in the region."

He explained the message from Biden is that the refugees need to be patient and "one day they will move to Israel as part of the so-called right of return. The 'right of return' means flooding Israel with millions of Palestinian refugees and their descendants as a first step toward its destruction and replacing it with an Iranian-backed Islamist state run by Hamas and Palestinian Islamic Jihad."