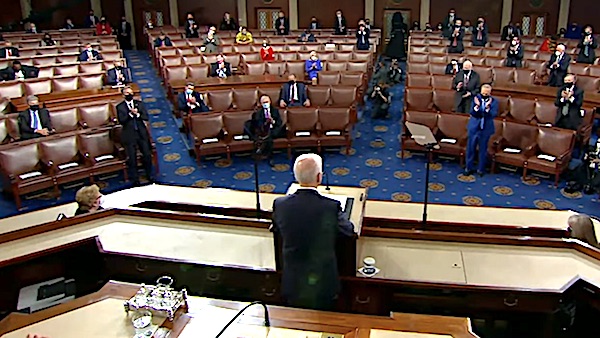 Democratic Illinois Rep. Bobby Rush has overwhelmingly voted by “proxy” since the practice was first authorized in 2020 amid the COVID-19 pandemic. At the same time, however, Rush has spent thousands in travel and event expenses on the dime of taxpayers and donors, including on days he voted by proxy, Federal Election Commission (FEC) and House disbursement records show.

In the early days of the COVID-19 pandemic, the House approved an emergency health policy allowing members to vote remotely — called “proxy” voting — as “a necessary and immediately feasible low-tech option” for those who cannot be physically present in the chamber. Since the policy was implemented in May 2020, Rush has spent close to $61,000 on travel and events, a Daily Caller News Foundation review of records found.

Rush, whose district represents much of Chicago’s south side, has voted by proxy at a rate of 90% since May 2020, the third highest among all House members, Business Insider reported in April. House records show Rush has continued to vote by proxy since that April report, including on June 21 — one day after he spoke at a Chicago Juneteenth rally, according to his Twitter account.

“The House rules only authorize the use of proxy voting due to the public health emergency caused by COVID-19, and that is why a member who votes by proxy must file a statement to the clerk stating that reason for it,” Kendra Arnold, executive director of the Foundation for Accountability and Civic Trust, a federal watchdog probing ethics in government, told TheDCNF.

“As in this case, when we see members regularly voting by proxy but also attending public campaign events at the same time, it is clearly contrary to the authorized purpose of the rule and it is plainly wrong,” she also said.

Rush’s campaign spent nearly $500 on travel with United Airlines on March 29, 2022, but that same day, he sent a signed letter to the House delegating his in-person voting status to another lawmaker.

The congressman also voted by proxy on March 17, 2022. However, his campaign spent nearly $600 that day at the Hyatt Regency in Washington, D.C., a four-star hotel, a filing shows.

Rush first submitted a proxy letter to the House clerk on May 26, 2020, “due to the ongoing public health emergency,” according to proxy submission records. Even though the congressman joined others in sending proxy letters to the clerk, he paid for a flight on May 27 that was just over $232, disbursements show, and another two weeks prior that was also $232.

“Although the House’s authorization for proxy voting was intended for a very narrow purpose, there appear to be few limits on its use,” Michael Chamberlain, director of the ethics watchdog Protect the Public’s Trust, told TheDCNF. “However, strict adherence to the letter of ethics rules is not always sufficient to maintain the public’s trust.

Another federal watchdog sounded the alarm on how proxy voting has increased among members even today.

“Proxy voting was initially introduced to during the COVID crisis to protect at risk members during the public health emergency,” Pete McGinnis, spokesman for the Functional Government Initiative, told TheDCNF. “Unfortunately, we have seen proxy voting not only continue to be used in the 117th Congress, it’s use is increasing. We believe this removes a critical part of the debate process that was intended by our founding fathers.”

The only two members of Congress to reportedly cast a higher percentage of votes by proxy than Rush were Democratic Florida Reps. Al Lawson and Frederica Wilson. However, they actually spent less on travel and event expenses, according to FEC and House disbursement records reviewed by TheDCNF.

Two weeks ago, on June 13, the congressman also spoke at a “Juneteenth flag raising ceremony” in Chicago, according to a Twitter post that shows him without a face mask. He voted by proxy on three bills that same day, records show.

Rush spent close to $20,000 of in tax dollars on travel between the months of August and December 2021, disbursement records show, for things like airfare, car leases, lodging, taxi or ride shares and gasoline. But for this same time period, he did not vote in person for hundreds of pieces of legislation, records show.

“It is outrageous that he is billing the public and donors for travel expenses while at the same time voting by proxy in Washington time and time again,” he also said.

Rush’s office did not respond to TheDCNF’s request for comment, nor did Lawson’s or Wilson’s. Rush is retiring from Congress after serving 15 terms.

SCOTUS should revisit the ban on daily school prayer