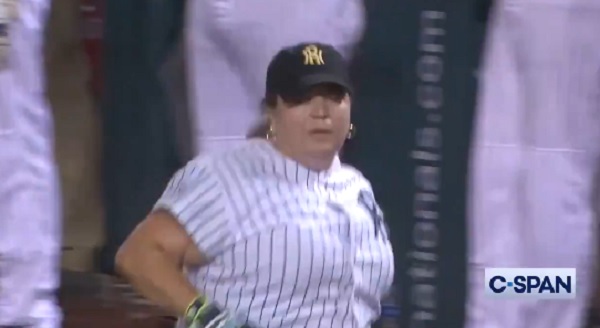 A member of the Democrat party who played a role in this week's annual fundraising interparty baseball game in Washington might not have succeeded much in building bipartisanship to address America's problems.

Those would include, under her party's president, massive inflation of 9.1%, a recession during the first six months of 2022, a crisis at the southern border, massive deficit spending and more.

It's because Rep. Linda Sanchez, D-Calif., flipped off the entirety of the GOP during the game.

Democrat Rep. Linda Sanchez (CA) flips off the Republican dug out. Her team got blown out 10-0.pic.twitter.com/CgPOaEsLs4

But Sanchez "displayed poor sportsmanship" when she was seen "flipping off the Republican dugout during the sixth inning with the Democrats trailing by five runs," the report said.

She walked, and was pulled for a pinch runner, and on the way back to her own bench, made the offensive gesture.

"It is unknown what provoked the emotion from Sanchez, but social media erupted in response," Fox News said.

Ironically, according to the report, "House Speaker Nancy Pelosi, the coach for the Democratic team, said in an interview with Fox News' Chad Pergram that comradery and the love of baseball were the reasons the congressional members continue to set aside their differences for the game."

She said, "This game is so great and people are so nice. That's what makes it great that we're competitive, and it's great to be here and have a little fun."