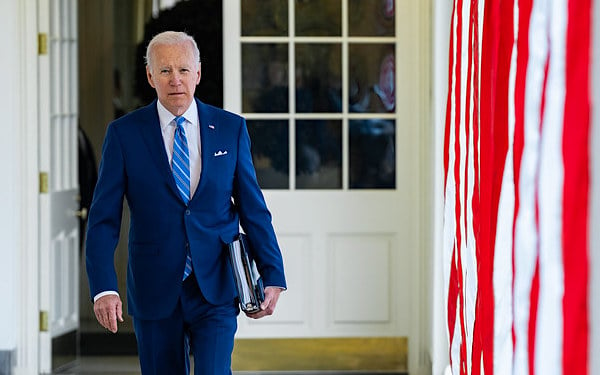 Joe Biden walks along the Colonnade of the White House, lined with American flags, Wednesday, May 4, 2022, to the Oval Office. (Official White House photo by Adam Schultz)

Commentator Steven Hayward, writing at the PowerLine blog, is predicting that Joe Biden is finished.

And Democrats themselves know this.

So, he predicts, there will be a three-way pincer movement to shove him aside and give other Democrats an opportunity to campaign for the 2024 nomination.

Of course, those candidates will not include Kamala Harris, he noted. "It goes without saying the Democratic Party intelligentsia knows that Kamala Harris is a hopeless candidate."

Regarding Biden, he wrote, "It’s pretty clear that the left is organizing to dump Joe Biden when it becomes evident that he’s a certain loser in 2024. Rather tha[n] waiting for a Ted Kennedy-like figure to challenge him in the 2024 primaries, which would likely doom Democrats to certain defeat, the left will need to push him out early, and clear the calendar for one or more Democrats to organize a serious presidential campaign."

There will be three parts, he said.

"First, we can expect a steady drumbeat of media stories such as the latest from mainstream political reporter Ronald Brownstein. His latest headline: 'Is Biden a Man Out of Time?' What Brownstein’s article makes clear is that the media and the Democratic base wish Biden would be even more aggressively leftist and polarizing."

That report documented that Biden "and his team have been following, not leading," on issues.

It continued, "To frustrated Democrats, the administration’s cautious response to the abortion decision is further evidence that Biden’s roots in an earlier political order have left him slow to acknowledge, much less respond to, the radicalization of the Trump-era GOP. The growing chorus among the president’s internal critics is that even if Biden was the right man for beating Trump, he has become the wrong man for combating Trumpism."

But the commentary pointed out that Brownstein managed to avoid "any mention of Biden’s obvious age-related maladies."

Then there also will be "indirect attacks" on the failures of the Biden White House, he wrote.

Secondly, there will be party insiders who dump on Biden in public, such as the recent comments from David Axelrod, who suggested Biden is "not in command."

Third will be polling data, which recently found 71% of respondents don't want Biden to run for a second term.

On that topic, Mark Penn, of the Harvard CAPS-Harris Poll, said, "President Biden may want to run again but the voters say ‘no’ to the idea of a second term, panning the job he is doing as president. Only 30 percent of Democrats would even vote for him in a Democratic presidential primary."

Those agendas will be appearing soon, and often, he wrote.

"Look for the pace of Bad-News-for-Biden polls to pick up in frequency and intensity. It becomes a self-reinforcing feedback loop for party insiders like Axelrod and the media alike: every new poll gives them the opportunity to provide 'analysis' that all points in the same direction."