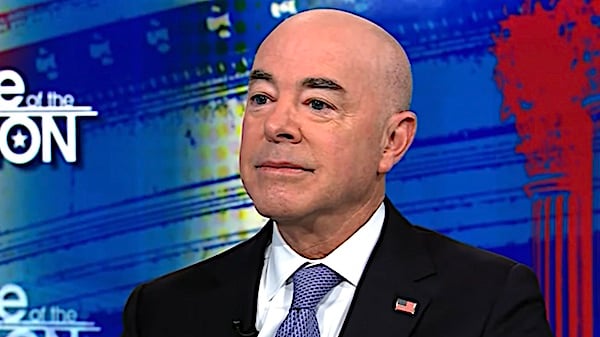 When Homeland Security Secretary Alejandro Mayorkas recently claimed that America's southern border is "secure," columnist Jarrett Stepman wrote at The Daily Signal Mayorkas has been claiming that, "with scant evidence," since he took office.

Actually, he described how there's been a "historic surge of illegal immigration across the southern border" since Joe Biden was elected.

"It’s been decades since we’ve seen anything like it," Stepman said, citing U.S. Customs and Border Protection reports of 1.7 million border encounters in 2021.

The border, he said, "is not secure," despite what the Biden administration claimed.

Mayorkas, in fact, is "idiotic" for claiming the border is secure, Donahue explained in an interview with Fox News.

"This is absolutely ridiculous to think this border is secure, that we're safe in our communities. We are not. We are on the cusp of complete collapse," he said.

Significantly, Donahue's jurisdiction is not adjacent to the border, it's a thousand plus miles away.

Nevertheless, he said in the report his county is experiencing a "crisis level" of drug overdoses, especially fentanyl and methamphetamine that comes across the southern border.

"We're at a crisis stage, quite frankly," he said. "We have never seen the numbers of seizures and the amounts of any drug, including methamphetamine, like we're seeing in fentanyl. And of course, we're still dealing with the methamphetamine crisis we've been in for years."

He said his jurisdiction has seen multiple hospitalizations "just from being in contact with" fentanyl.

"There is not a day or night goes by that we're not dealing with someone associated with the Mexican cartels, at least in our community and communities throughout the state of Idaho. … We are at war with the cartels," he said.

"This is absolutely ridiculous to think this border is secure, that we're safe in our communities. We are not. We are on the cusp of complete collapse," he said.