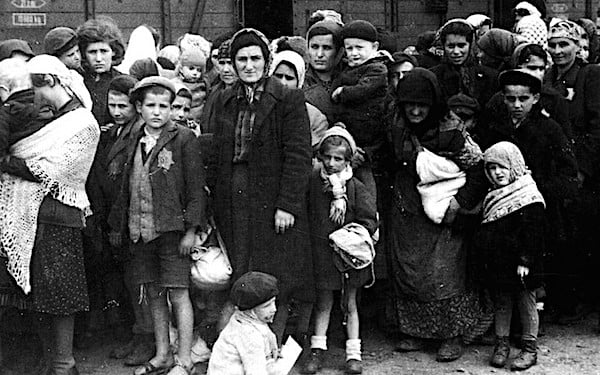 Jews from Hungary arrive at Auschwitz in May of 1944, part of 'The Auschwitz Album' series of photographs. Most of these Jews were murdered later that day. (Public domain)

(TIMES OF ISRAEL) -- Rock star Geddy Lee found never-before-seen photos of his mother’s family thanks to a new effort to apply artificial intelligence facial recognition technology to photographs from the Holocaust.

Lee’s mother, Holocaust survivor Mary Weinrib, died last summer at 95 years old. But the researchers of the AI technology, From Numbers to Names, managed to find a photo of Weinrib from her time at the displaced persons camp in Bergen-Belsen — a photo that then led Lee to find other photos of his mother’s extended family from the Yad Vashem photo collection.

Aside from her love for cooking and baking for her family during the Jewish holidays, Weinrib was an early supporter of Lee’s band Rush. The documentary series From Cradle to Stage, created by Foo Fighters musician Dave Grohl, explores the influence of mothers on their rock star children. The final episode of the first season from last year focuses on Weinrib and Lee’s relationship.