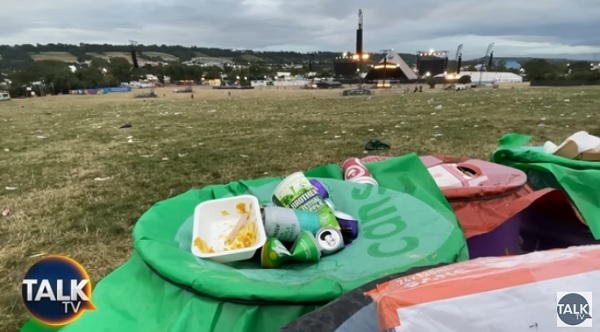 Those "green agenda" agitators who travel on private jets to conferences where they preach to others against the use of fossil fuels, or in the case of John Kerry accept a climate award, have done it again.

It was at the Glastonbury Festival 2022 in the United Kingdom.

The climate change agenda was on full display for several days, but when things wrapped up, attendees left behind fields literally plastered with trash.

The Gateway Pundit pointed out it followed climate activist Greta Thunberg's sermon about saving the environment.

"It’s no secret that leftist ideologues, especially those of the ‘climate change’ variety, are some of the most egregious offenders when it comes to hypocrisy. Some of the most fervent advocates of the ‘save the planet’ crusade are often caught failing to live up to their proclaimed standards (climate change warrior John Kerry and his private jet flights, as just one example)," the commentary said.

"While we are all familiar with the hyper-delusion and psychopath-level hypocrisy that is prevalent among the elitists, this duplicitous behavior can be found throughout the climate-obsessed within the leftist hierarchy. Instead of hopping on their private jets and yachts in defiance of their stated agenda, the masses are beholden to a lesser form of self-righteous denial that is equally inconsistent with the green agenda."

It continued, "And this stinking hypocrisy was on full display this week when Greta Thunberg, the young face of the green movement, made an appearance last week at the Glastonbury Festival 2022."

She was positioned on the main stage to preach about climate and environmental "justice."

In fact, the commentary charged, she "screeched for the people of the world to come together in order to heal the planet and protect it from the evil no good humans and their fossil fuels."

"We are capable of the most incredible things,” she said. “Once we are given the full story… we will know what to do. There is still time to choose a new path, to step back from the cliff”… Whatever that means."

She left the stage, and the crowd left the field, and the garbage remained. Some 800 acres.

"Pictures from the event show what looks like a massive trash dump, with chairs and litter strewn across the entire area. They created a literal sea of trash – I don’t think this is the type of coming together she was talking about," the commentary said.

Estimates were that it would take several hundred people at least four days to clean up the mess.

On Youtube, a report noted the "cleanup" had begun at the site.

The Daily Caller News Foundation had reported on Thunberg's sermon condemning world leaders for not doing her climate change agenda.

"The globetrotting 19-year-old climate activist warned of an imminent 'total natural catastrophe' and demanded more vigorous action to save the planet as part of her surprise appearance at the festival, according to the BBC," the report said.

She warned earth's ecosystem is breaking, worse than changing.

"They can say we are in a climate emergency as they open up new coal mines, new oil fields, and new pipelines. It has not only become socially acceptable for our leaders to lie, it is more or less what we expect them to do,” she complained. "We are approaching the precipice, and I would strongly suggest that all of those who have not yet been greenwashed out of our senses to stand our ground."