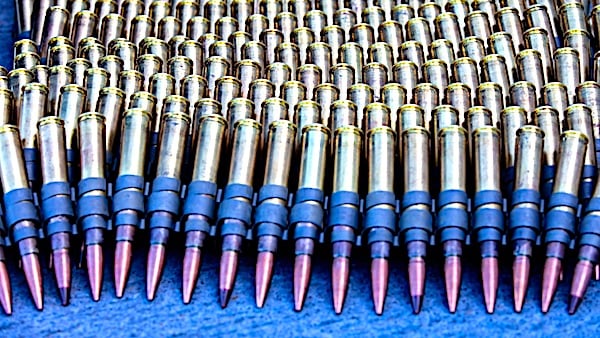 The Internal Revenue Service has been up to some questionable stunts in recent years, like the time during Barack Obama's presidency that officials there targeted Christian and Tea Party groups because of their names, and wouldn't let them register.

That effectively prevented them from commenting on Obama's run for a second term, of course, and the government later paid millions for its misbehavior.

But now several members of Congress have a larger concern about the IRS: the fact that it buys thousands of rounds of ammunition every year.

Specifically, it would prohibit the IRS from acquiring any ammunition.

The bill itself seems pretty comprehensive, stating, "Notwithstanding any other provision of law, the Internal Revenue Service may not acquire (by purchase or otherwise) any ammunition…"

Just the News explained, "The bill arrives following Gaetz's discovery that this year alone the IRS has spent $725,000 on ammunition. Odd timing, he says, considering the nationwide shortage of ammo and Biden administration's stated animosity toward gun rights."

He told Fox News recently, "Here's the Biden plan: Disarm Americans, open the border, empty the prisons – but rest assured, they'll still collect your taxes, and they need $725,000 worth of ammunition, apparently, to get the job done."

At American Military News, a report said Gaetz also cited the Railroad Retirement Board and other federal agencies for stockpiling ammo.

"Call me old-fashioned, but I thought the heaviest artillery an IRS agent would need would be a calculator. I imagine the IRS in green eyeshades and cubicles – not busting doors down and emptying Glock clips on our fellow Americans," he said. "Certainly it’s troubling that in 2022 alone, the IRS has spent around $725,000 on ammunition."

He said, "When we used to talk about the IRS being weaponized, we were talking about political discrimination, not actual weapons for the IRS."