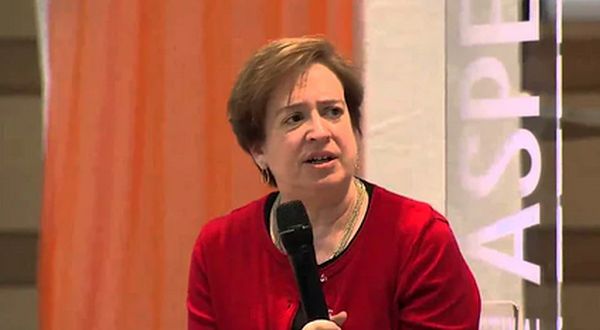 Supreme Court Justice Elena Kagan, appointed by Barack Obama, has claimed at a conference that the court must follow "public sentiment" in its decisions or it risks losing its legitimacy.

And she was immediately schooled on the fact that "public sentiment" should have nothing to do with the court's decisions, as they are supposed to be based on the Constitution.

The Washington Examiner explained her comments came at a judicial conference in Montana.

"I'm not talking about any particular decision or even any particular series of decisions, but if over time the court loses all connection with the public and with public sentiment, that's a dangerous thing for a democracy," she claimed.

Kagan, a far-left liberal, charged it could be dangerous if people continue to view the justices as partisan, "likely an allusion to the recent contentious court term that saw the overturning of Roe v. Wade and an expansion of gun rights," the report said.

"Overall, the way the court retains its legitimacy and fosters public confidence is by acting like a court, is by doing the kinds of things that do not seem to people political or partisan," she said.

However, basing court opinions on the sentiment expressed by the public likely would result in chaos in short order, as a commentary at Twitchy pointed out.

"Justice Kagan seems to think SCOTUS should be more concerned with 'public sentiment' than you know ... the law. Or the Constitution."

Kagan warns that Supreme Court legitimacy at risk if it strays too far from public sentiment https://t.co/0hkcP6qGNx pic.twitter.com/PUukrJ46TF

Kagan tried to explain that there have been times in history "when Supreme Court justices failed to discipline themselves and instead 'attempted to basically enact their own policy or political or social preferences,' saying that this puts court legitimacy at risk," a Hill report explained.

"What puts the court's legitimacy at risk is playing politics or allowing the mob to sway them …. So you know, the opposite of what she's saying here," Twitchy explained.

One person on social media explained despite her claims, sentiment actually is irrelevant to the court's work, or it should be.

As long as they do their jobs and determine what is or is not Constitutional, public sentiment is not relevant.

The Court isn't a legislature. Public opinion has literally zero to do with its function or legitimacy.

Twitchy continued, "The guy who appointed her once complained that the Constitution was a barrier to him getting things done. So we're not entirely surprised she may not really know how to do her job."

Democrats have been enraged in recent weeks as the Supreme Court, based on the Constitution, ruled against an extreme limit on the Second Amendment, ruled that school programs could not discriminate based on religion, and pointed out that Roe v. Wade was "egregiously" wrong from its start, and returned regulation of the nation's lucrative abortion industry to states.

Several pointed out, to Kagan, "That's not how it works."