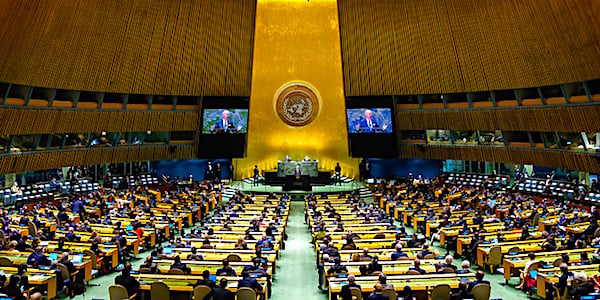 A new poll done by Rasmussen Reports in conjunction with the Heartland Institute reveals that Democrats apparently have given up on the great experiment in self-government that the United States is, instead preferring to turn over power to the United Nations, and get rid of the Supreme Court as it now stands.

"I am shocked and dismayed by these poll results," explained research fellow Donald Kendal of the Heartland Institute.

The survey interviewed 1,025 U.S. Likely Voters July 6-7. The margin of sampling error is +/- 3 percentage points with a 95% level of confidence.

The polling report explained in the wake of recent decisions that strengthened the Second Amendment, reined in the administrative power of the Environmental Protection Agency, and ended the federal protection for abortion and allowed states to impose regulations, "only 33% of Democrats view the [Supreme] Court favorably."

The report said, "A majority of Democrats view the Supreme Court as racist and discriminatory against women, and favor either 'packing' the court by adding extra justices or replacing the existing court with democratically elected justices."

Among Democratic voters, two out of three would choose to expand the Supreme Court to 13 seats, including 37% who "Strongly Favor" the idea that essentially would allow Joe Biden, a liberal, to appoint like-minded liberals to be a majority on the court, so that liberals always would get their desired result in cases there.

Overall, based on a strong rejection from Republicans and independents, 51% would oppose such a plan.

On the plan to have Supreme Court justices elected directly by the people, 53% of Democrats would favor it, including 33% who "Strongly Favor" the plan. Only 21% of Republicans would agree.

Overall, a majority of respondents disagree with both Democrat opinions.

The poll revealed that a full 39% of Democrats say that would like to give the United Nations veto power over Supreme Court decisions. Only 17% of Republicans agreed.

The rejection of the Supreme Court is closely tied to those who support Joe Biden most emphatically.

"By and large, the American people hold the court in high esteem, as this poll amply demonstrates," added Heartland Institute senior editor Chris Talgo. "However, there is absolutely a movement afoot, principally among leftists and America’s youth, who desire to ‘reimagine’ the Supreme Court so that it will become nothing more than a rubber stamp for their radical agenda. Fortunately, most likely voters reject this notion and steadfastly support the Supreme Court."