A few weeks ago, I wrote about what my husband calls "chalkboard experts." These are people who are certain their elaborate plans for everything from energy policies to world domination are fail-safe because they figured it all out in advance on the chalkboard, even though they have no boots-on-the-ground experience in whatever expertise they claim. "But I've got it all figured out! See, I've written it all out on the chalkboard! Of course it will work!"

Keep this in mind for a moment.

After the Supreme Court decision overturning Roe v. Wade, America braced for the anticipated violence by radical leftists, and weren't disappointed. Anarchists roamed the cities, torching buildings, vandalizing churches and clinics, blocking highways and generally making jerks of themselves. But for the most part, the mayhem was curtailed to urban areas. (Ironically, most of those urban areas are blue. As someone put it, "The great irony is that Democrat cities will be burned down by Democrats in Democrat states where abortion will still be legal.")

There was one exception, however. A chalkboard expert posting under the username "RipItThrowAway" made a rather amusing and lengthy threat on Reddit as follows:

"The radical Christians are found in the rural areas. Their towns are defenseless, they have almost no cops and their firemen are volunteers. They have to borrow cops and firemen from neighboring jurisdictions miles away in order to handle anything big. And they think they're safe out there. Forget burning cities, cities are on our sides. It's time for rural areas to feel the heat.

"You show up 100 deep in every rural town in a 50 mile radius intent on revolution, you'll crash their system and make them pay.

"And if you all think I'm kidding, I'm dead serious. This [reversal of Roe v. Wade] was caused by backward a** rural conservatives operating out of a Christianized worldview (even if they're not Christian, they're heavily influenced by it), they were the ones who voted for Trump in '16; those disillusioned redneck/white trash/blue collar (to quote a country song) types who flipped massively for the GOP. Punish them. Punish their towns. They say 'BLM burned the cities to the ground,' I say 'let them see firsthand what it's like when a community is truly burned to the ground. They want a civil war? They should have been careful what they asked and voted for.'

"I'm not the organizing type. But maybe someone who is can organize that. Start in a certain state in the Midwest often called 'the south's middle finger to America.' It's literally what the south would've looked like if it wasn't reconstructed."

You see, this is a classic example of chalkboard planning, where someone (who apparently has never been to rural America) has it all figured out. If he plans X, then Y will invariably follow. What could possibly go wrong?

The trouble with chalkboard experts, of course, is they never factor variables into their equations. In this case, there are a few real-life variables that might influence this plan of raiding rural towns and burning them to the ground.

Does this person expect the residents of these rural communities to cower in fear or stand around helplessly, passively waiting for the far-flung county sheriffs to arrive and save the day? Believe me, if a gang "100 deep" is invading the town, no one will be waiting for law enforcement. They'll take matters into their own hands in about 30 seconds. And while rural residents aren't trained to the level of violence and anarchy as these radicals, they ARE trained in the use of firearms. Extensively. In fact, the vast majority of military veterans originated in small towns and rural locations, and they take their oath of defense seriously. Welcome to Real America!

"RipItThrowAway" can dismiss those of us living in rural areas as poop-kicking backward rednecks all he wants, but remember how poop-kicking rednecks pass their leisure time. They shoot. They plink at targets, they aim at clay pigeons, they hunt with either firearms or bows. They are intimately familiar with every back road, every rock outcrop, every trail, every tree stand, every hiding place for miles and miles around.

Does "RipItThrowAway" really think he can march "100 deep" and get away with doing what he does in his own city? Is that what his chalkboard says? Does he really think if a town is facing a threat like that, people will wait for the local law enforcement to show up before taking action? As one person noted, "I'm just going to point out that this deranged lunatic made an excellent case for 2nd Amendment rights." (Some are calling this "Suicide by Redneck.")

(As just a small example: I remember seeing a young friend on her 13th birthday. She had gone hunting that morning with her mother and single-handedly shot her first bear. Whatever your views about hunting bear, this was not a 13-year-old to mess with. Neither was her mother.)

Needless to say, the mockery came on thick and fast the moment "RipItThrowAway" posted his threat. A few samples: 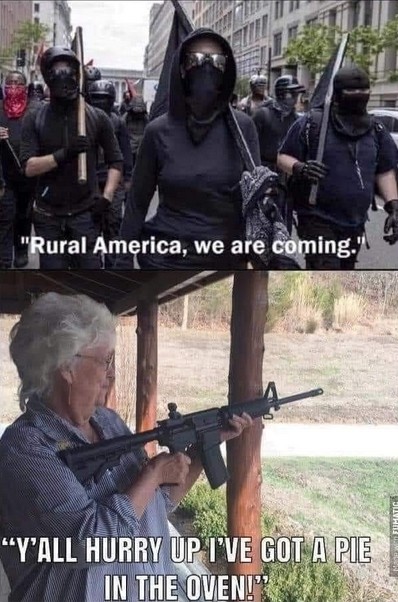 So this is what "RipItThrowAway" can anticipate if he decides to invade the "helpless" inhabitants of rural America. My guess is there are some variables to the equation he hasn't considered in his bid for chalkboard violence. In fact, after making this brilliant suggestion, "RipItThrowAway" appears to have deleted his Reddit account. This, perhaps, was a wise thing to do.