Why did the New York Times run a story in defense of the one man who has been captured on video urging people to storm the Capitol on the day before the Jan. 6 riot and then directing the breach of the guarded perimeter while Donald Trump was still speaking one mile away?

That's what Revolver News reporter Darren Beattie wants to know. It was Beattie who brought attention to the mysterious Ray Epps last fall, presenting video and other evidence to support the theory that the Arizona man was among many federal government operatives acting as provocateurs on Jan. 6.

In an article Thursday for Revolver News, Beattie breaks down the Times "puff piece," which opens by describing Epps as "a man whose life has been ruined by a Jan. 6 conspiracy theory."

The Times says Epps "has suffered enormously in the past 10 months as right-wing media figures and Republican politicians have baselessly described him as a covert government agent who helped to instigate the attack on the Capitol last year."

But Beattie digs out the buried lede of the story by the "paper of record," which is titled "It's just been hell: Life as the victim of a Jan 6 conspiracy theory."

The Times refers to a text message Epps sent to his nephew describing how he "orchestrated movements of people" to the Capitol after Trump's speech.

Beattie, providing a video compilation (embedded below) of Epps "orchestrating movements," wonders what Epps said in that text and whether it at least hinted as his motive for driving all the way to Washington to direct people into the Capitol.

The Times apparently never asked Epps that foundational question. And, while Epps states he had no association with "law enforcement," the story presents no explicit denial by him of a connection to military intelligence, the Department of Homeland Security, the Joint Terrorism Task Force or any cutouts or intermediaries.

Last October, Beattie reported evidence that FBI informants and Antifa operatives turned a peaceful Jan. 6 rally into a riot, spotlighting the role of Epps. In a follow-up report in December, Revolver News presented evidence, backed by videos and images, that there were others who worked in tandem with Epps to orchestrate the break-in.

Epps initially was on the FBI's Most Wanted list in connection with Jan.  6. Then, with Revolver News putting a spotlight on him, he disappeared from the list. And despite the extensive evidence of his involvement, he has not been indicted.

See the video compilation of Epps at the Capitol:

Curiously, Epps' story is that he made a last-minute decision to drive all the way from Arizona to the nation's Capitol "for Mr. Trump's speech about election fraud."

But Epps didn't go to Trump's speech. Instead, as Beattie writes, "he spent the evening of January 5th and the morning of the 6th telling people to go into the Capitol."

Apparently, it did not occur to the Times reporter, Alan Feuer, that he should ask why "Trump supporter" Epps went though all of that trouble and cost and then ended up at the Capitol while the speech was taking place one mile away in front of the White House.

Beattie asks: "For that matter, did Feuer ask where Epps got the idea to urge people to go into the Capitol in the first place? Did it occur to Epps out of the blue? Did someone else give Epps the idea? If so, who?" 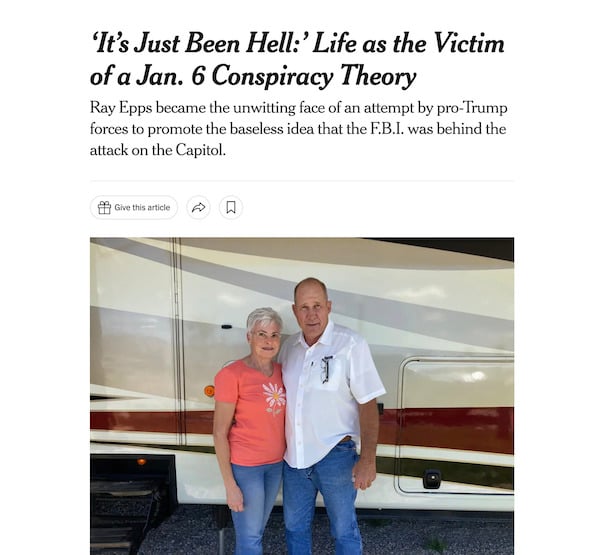 Where did he get that idea?
Beattie argues that the purported purpose of the Democrats' House select committee is to find out what caused the events of Jan. 6.

"Wouldn’t it be newsworthy to know where Epps got the idea, and why he was so doggedly fixated on that particular mission?" he asks.

The fact that the Times did not ask those questions, he writes, "indicates that this is one of the sloppiest and most transparent cover-up jobs" in the paper's history.

Beattie finds irony in the Times' feature on Epps. The paper's own video documentary about Jan. 6, "Day of Rage," refers to Epps as among the rioters for whom "storming the capitol was part of the plot all along."

The Times piece suggests Epps will sue news outlets – presumably Revolver News and Tucker Carlson, among others – for defamation for presenting evidence that the Arizona man was part of a "plot."

Beattie asks if Epps might want to sue the Times itself for suggesting that he pre-planned the Capitol attack.

Epps, he writes, is "the smoking gun of the Fedsurrection narrative."

"If it turns out Epps was acting on behalf of some government agency on January 6," says Beattie, "the entire official narrative collapses in one fell swoop."

The New York Times, he says, is "kicking off a massive damage control campaign to make any unsanctioned ideas about Epps too toxic and dangerous to print."

"We're on to their game — it’s too late," Beattie concludes. "The Times piece reports that Ray Epps just wants the truth to come out. Let it be so, and stay tuned for much more."

The holes in the story
The Jan. 6 committee is claiming the Proud Boys group was part of a grand conspiracy directed by Donald Trump. However, the New York Times reported last September that a member of the Proud Boys who entered the Capitol on Jan. 6 was an FBI informant. And, significantly, the paper reported that the informant – who texted his bureau handler during the riot – insisted the Proud Boys had no advanced plan to enter the Capitol and disrupt the certification of the 2020 presidential election.

The FBI said last August it had not found evidence that Jan. 6 was the result of an organized plot to overturn the election, according to four current and former law enforcement officials.