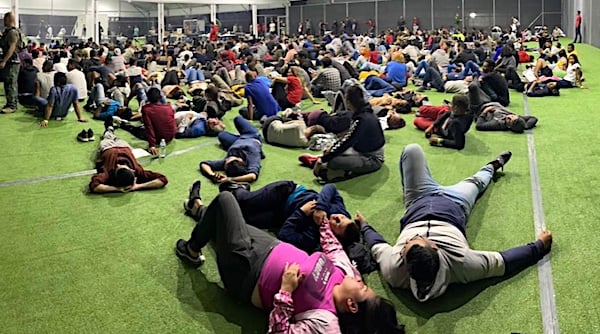 A picture leaked from inside the massive government tent facility near Eagle Pass, Texas, shows several hundred people waiting to be processed in an area intended for recreation. (Courtesy image)

As the U.S.-Mexico border continues to see a record-breaking number of migrants, new photos published by the Washington Examiner provided insight into the conditions illegal immigrants endure after they cross into the U.S.

The photographs reveal the overcrowded conditions in which migrants are detained, such as small rooms packed with dozens of people and people sleeping on the floor in spaces meant for recreation and sports, according to images obtained by the Examiner from U.S. Border Patrol agents.

Night and day, smugglers push migrants across the Rio Grande into Eagle Pass, TX by the dozen or hundreds.

“Since the groups are so large, there’s no room for where we do the intake, so they have to take them to the rec area,” said a Border Patrol agent who works inside. pic.twitter.com/3UNLnbRvqf

The agents, who spoke on the condition of anonymity, told the Washington Examiner that if people could see inside the migrant detention centers, they would be appalled by the scale of the whole process.

SCOOP: Inside one of Border Patrol’s tents where migrants are detained

They told the Examiner that the goal is no longer to deter illegal immigration, which is unfolding at the highest level in national history. Rather, the objective is to facilitate migrants and process them into the U.S. system and, more likely than not, release them into the United States.

In previous years, the Del Rio Sector in rural Texas had been one of the least-traveled sectors on the U.S.-Mexico border. Between 2000 and 2020, agents there only apprehended more than 100,000 migrants twice, once in 2000 and again in 2001, according to the Border Patrol.

However, migration and smuggling routes have shifted dramatically. From October 2021 to May 2022 alone, Border Patrol has encountered 280,622 migrants in Del Rio, according to U.S. Customs and Border Protection (CBP).

Due to the increase in migration in the sector, CBP announced the opening of a new “soft-sided” facility in Eagle Pass, Texas, on July 13.

The primary purpose of the new facility, known as “Fire Fly,” is to “safely and expeditiously process individuals in Border Patrol custody,” CBP said. The new facility can hold a maximum of 1,000 individuals and replaces a smaller structure opened in Eagle Pass in the spring of 2021, according to a CBP press release.

Meanwhile, across the border in Piedras Negras, Mexico, a waiting list of migrants hoping to reach the port of entry “ballooned to 2,000 before being halted,” double the max capacity, according to the Associated Press.

Local officials are skeptical that this crisis will end in the near future.

“There’s no plans for it to end. They wouldn’t have opened this huge new facility if it was going to end,” a Border Patrol agent told the Washington Examiner.

CBP and the Department of Homeland Security did not respond to requests for comment from the Daily Caller News Foundation.