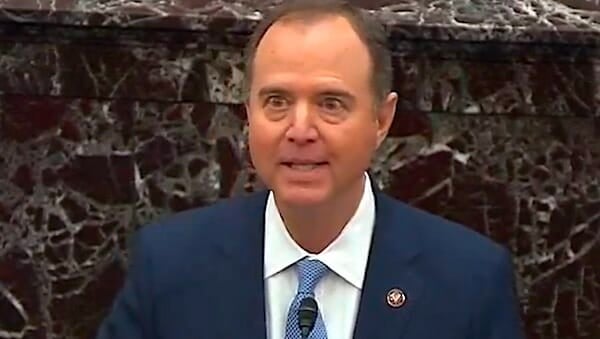 He repeatedly told hangers-on in the media that he knew for certain Trump's campaign had colluded because he'd seen the evidence.

"Evidence," of course, that special counsel Robert Mueller, with millions of dollars, dozens of investigators and years of time was unable to detect.

But that lack didn't deter Schiff from insisting he'd seen it.

He also made a series of other wild claims, including one that he feared President Trump would give Alaska to Russia, and his performance representing citizens in California prompted then Republican Congressman John Ratcliffe to describe Schiff as helping "Vladimir Putin and Russia with their efforts to sow the seeds of discord in American elections" more than anyone else.

At one point, Fox News personality Sean Hannity accused Schiff of being an "old leaker and liar" and colluding with Russians himself.

"We do have evidence of collusion. Russian collusion in plain sight. Alright, let’s look shiftless Schiff. He could easily be talking about himself. Remember when he tried to dig up dirt on President Trump from his own Russian sources? It turns out he was being pranked by a Russian radio personality. He thought he was talking with the Russians. A conspiracy, collusion with the Russians and we actually, Mr. Mueller, we have evidence."

Hannity played a clip of Russian pranksters Vladimir Kuznetsov and Alexey Stolyarov, better known as Vovan and Lexus, claiming to Schiff that they had compromising images of a "naked" Trump. Schiff is heard saying that his staff will follow up in order to obtain the materials for the committee and the FBI.

Now a report at the Boston Globe is speculating whether Americans could envision that level of intelligence, and dedication to his congressional goals, in the office of the speaker of the House.

"An eleventh-hour push by Representative Adam Schiff, Democrat of California, in recent weeks, has taken Democrats by surprise and raised questions about how the caucus wants to mirror the diversity that makes up its party’s base," the report said.

It continued, "Schiff, who gained notoriety investigating Russia’s involvement in the 2016 election before leading the first impeachment of former President Donald Trump, is exploring a bid to lead the House Democratic caucus if Speaker Nancy Pelosi, Democrat of California, retires after the midterm elections, according to more than a dozen House members and top aides who have spoken directly with the congressman."

Both of Pelosi's orchestrated impeach-and-remove attacks against Trump failed. And many critics now consider her partisan committee investigation of the Jan. 6, 2021, riot at the Capitol her third shot, this one aimed at prevent Trump from running in 2024.

The Globe reported the account of Schiff's plan "is based on interviews with eight lawmakers and 18 staff members and lobbyists familiar with leadership dynamics, all of whom spoke on the condition of anonymity to discuss private conversations."

Lined up to succeed Pelosi, if she goes away, would be candidates including Majority Leader Steny Hoyer, Democrat of Maryland, and Rep. James Clyburn, Democrat of South Carolina, and Rep. Hakeem Jeffries, Democrat of New York.

Now Schiff, with his "overtures," is "planting the seed" that he wants to move into leadership.

"Schiff has also reached out to members in a variety of key blocs in the vast Democratic caucus, including the minority tri-caucuses made up of the powerful Congressional Black Caucus, the Congressional Hispanic Caucus, and the Congressional Asian Pacific American Caucus," the report said.

The report explained many Democrat voters are insisting on a younger and more diverse leadership structure. And Schiff is just what they are wanting to leave behind: at age 62 older, white, and in politics for nearly three decades."

There's widespread skepticism he could gather enough support. And the report noted those interviewed suggested he might have a "prominent" role for the party, just not in leadership.