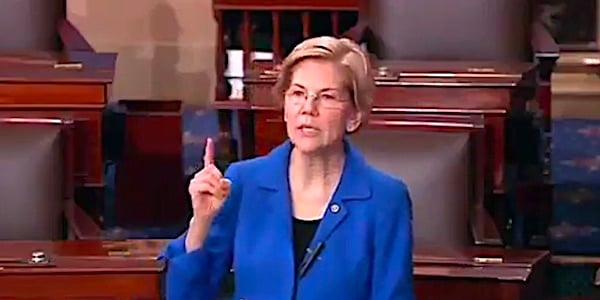 One week ago, Democratic Sen. Elizabeth Warren was calling for the crisis-pregnancy centers that give women an alternative to killing their unborn child to be more "transparent" about the services they provide.

Now, the Massachusetts lawmaker is calling for them to be shut down nationwide.

"In Massachusetts right now, those crisis-pregnancy centers that are there to fool people who are looking for pregnancy termination help outnumber true abortion clinics by 3 to 1," she told reporters Tuesday.

"You should not be able to torture a pregnant person like that."

Casey Mattox, a senior fellow at the Koch Institute, reacted to Warren's remarks.

"Not gonna sugar coat this. It’s evil," he tweeted. "If I knew nothing about Elizabeth Warren but the lies she tells about pregnancy centers I’d know enough."

The director of Right to Life of Northeast Ohio, Allie Frazier, said it seems that opponents of abortion can never satisfy proponents.

"As pro-lifers, we are constantly told by the pro-abortion side that we don't do enough to support women," she tweeted. "However, when pro-lifers provide 5 star pregnancy help through our PRCS, they actively try to sabotage us. This isn't about helping women. This is about pushing abortion."

Liz Warren says that Crisis Pregnancy Centers "fool" people who are looking for abortions. No, Liz, their name says plainly that they help with pregnancies.
Now tell me the name Planned PARENTHOOD hasn't fooled anyone.

The New York Times reported in May that more than 16 million women of reproductive age live closer to a crisis-pregnancy center than an abortion facility. And in a "post-Roe America," that figure is poised to more than double.

"We need to shut them down." Sen. Warren on Pregnancy Resource Centers.

The pro-life Charlotte Lozier Institute describes the work of crisis pregnancy centers on its website:

Provide essential and professional care to vulnerable women and youth on a free or low-cost basis typically including: pregnancy testing; options consultation (including education on parenting and adoption, parenting and child raising, and abortion); medical services (early obstetrical ultrasounds, medical exams, STD testing and treatment, and increasingly other health services); prenatal and parenting education; material assistance; sexual risk avoidance education; after-abortion recovery support; referrals for medical care; and linkages to vital community and public health resources. Care is provided by trained workers and licensed professionals through a holistic health paradigm taking into account emotional, social, mental, spiritual as well as physical health. By providing practical assistance and links to needed resources, pregnancy centers improve health outcomes for women and promote health and well-being for themselves, their children, and their families.

Warren recently called for the centers to provide full disclosure of the services they offer, contending that if that were done, the number of pregnant women who use them would plummet "pretty close to zero."

"These are deceptive outfits that front for groups that are trying to harass or otherwise frighten people who are pregnant to keep them from seeking an abortion, and they do so under the cover of pretending to offer abortion services," Warren claimed during a press conference June 27 in downtown Boston.

"So I'd like to see us talk about how we might move more aggressively to make sure that someone doesn't face that bait and switch that could be traumatic at a time that that person is already under stress."

Actress Patricia Heaton, a pro-life activist, reacted to Warren's remarks at the time, noting crisis pregnancy centers have been forced to hired armed security due to an increase in attacks.

On Tuesday, the director of a crisis pregnancy center in California told the Senate Judiciary Committee measures her clinic had been forced to hire 24-hour security.

"Pregnancy care centers from coast to coast are being targeted for violent assaults of vandalism, and hateful attacks online and in the media," said Heidi Matzke of the Alternatives Pregnancy Center in California. "Just last week ... a man approached our care center with an armed machete."

The attacks have increased since Politico in May published a draft of the Supreme Court opinion indicating the court would overturn Roe v. Wade. The opinion in Dobbs v. Jackson Women's Health Organization was released last month, confirming the decision.

"We have had to reinforce doors and bullet-proof our walls," Matzke told the senators. "We've had to paint our building with anti-graffiti coating. We've added cameras, armed our staff with pepper spray and stopped running our mobile clinic because of threats of violence."