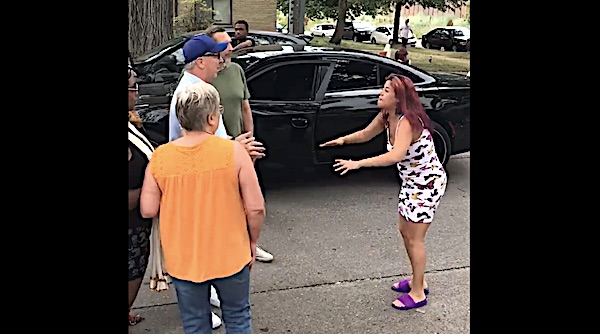 A woman confronted protesters outside her home Saturday after Minneapolis police fatally shot a man who had fired into her apartment while her children were inside, according to KARE 11 News.

Andrew Tekle Sundberg, who was black, was shot and killed following a six-hour standoff with police after he fired into the apartment of a mother, Arabella Foss-Yarbrough, and her two young children, according to KARE 11. Shots came through the walls of the apartment while Foss-Yarbrough was cooking for her children, she told the outlet.

Things boiled over during Saturday’s rally and march for Tekle Sundberg, when the 24 year old woman who says he was shooting into her apt. showed up voicing her frustration with those gathering in front of her building on Sundberg’s behalf. @kare11 * video contains profanity * pic.twitter.com/qdi1vbgO7k

Foss-Yarbrough shared her story with the protesters outside her apartment who had gathered in support of Sundberg, explaining that her children were traumatized and their lives had been endangered by the shooter, according to a video shared by KARE 11.

Some of them heckled her and told her to stop talking, repeatedly shouting “shut up” and “you’re alive.”

“This is not the time or the place,” one protester yelled.

Others got closer to the mother in an apparent attempt to calm her down, with one man saying, “I’m sure it was terrible.”

She shared these photos of her apartment with us. https://t.co/hbIwTolUwv pic.twitter.com/NqSXbroxd2

Foss-Yarbrough continued shouting back at the demonstrators.

“He tried to kill me in front of my kids,” she said, noting that one of her children is black. “My kids have to deal with this and probably have a mental illness now because they almost lost their lives. There’s bullet holes in my kitchen because he sat in the f***ing hallway watching my moves.”

“I wish it never happened either. Now I don’t have a place to call home. I can’t sleep at night,” she said. “This is not OK. Just go home.”

Foss-Yarbrough shared photos of her apartment with KARE 11, showing a front door pierced with six bullet holes, a bathroom strewn with broken glass from a shattered mirror and a can of hair product pierced by an apparent bullet hole.