It's no secret the international food supply has come under severe stress in the last year. Fertilizer and livestock feed shortages, diesel prices, the Russia-Ukraine conflict, the collapse of Sri Lanka, green energy policies, droughts, mysterious food factory fires, transportation issues – the dire news goes on and on.

Many of these events seem deliberately orchestrated. Sri Lanka didn't collapse because it was having a bad hair day; it collapsed because its government forcibly shut down commercial fertilizer usage in an attempt to implement organic substitutes. The result was a catastrophic reduction in yields and mass hunger. Coupled with the loss of tourism (from COVID lockdowns) and fuel shortages, the result is a previously stable nation in absolute tragic freefall.

A similar scenario is unfolding in Holland, a small nation that exports a staggering amount of food. In an effort to conform to "green" standards and reduce nitrogen emissions by 70% by 2030, government mandates would result in a huge number of farms being forcibly shut down, with a predictable reduction in food production. The issue has been simmering for a number of years, and this summer farmers across the country exploded in rage. "The forced reductions in farming and food production are said to be an 'unavoidable' part of the Green Agenda to improve air, soil and water quality," notes Dr. Joseph Mercola.

"The Netherlands is the largest exporter of meat in Europe and the second-largest exporter of food overall after the United States, a remarkable feat for a nation half the size of Indiana," notes the New York Post. "But even many on the political left say the government demands are too extreme, based on radical green fantasies and dodgy science."

Inspired by the Dutch protests, farmers in other Europeans nations (Poland, Germany, Italy, Spain, etc.) which face similar "green" restrictions are staging similar revolts. Yet if we express concerns over the seemingly deliberate destruction of the food supply, we're patted condescendingly on the head and dismissed as conspiracy theorists.

All this information is to set the stage for why home gardening is exploding. Faced with food insecurity or concerns about future shortages, millions (or possibly billions) of people around the world are trying their hand at growing their own fruits and vegetables.

So why are experts at the University Medical Center Mainz in Germany suddenly issuing an "urgent" warning that gardening can cause heart disease by exposing people to harmful soil pollutants? (I swear I'm not making this up.)

According to The Sun, "Gardeners have been warned that their habit could leave them at an increased risk of heart disease. Medics found that pollutants in the soil could have a 'detrimental effect on the cardiovascular system.' The results of the analysis pushed experts to recommend that people wear a face mask, if they are in close contact with the soil. Experts at the University Medical Center Mainz, Germany said pollution of air, water and soil is responsible for at least 9 million deaths each year. They highlighted that more than 60 per cent of pollution-related deaths are due to heart issues such as strokes, heart attacks, heart rhythm disorders and chronic ischaemic heart disease."

So you're telling me that Aunt Mabel and Uncle Charlie, who have kept a garden for decades, are now facing death for spending time growing healthful food in the fresh air and sunshine? Or your next-door neighbors, who are dipping their toes into the wonders of a backyard garden for the first time, are putting their lives in danger by planting carrots? Really?

Now I don't expect anyone to take this recommendation seriously, but I do find the timing and urgency of this warning very interesting. Why now? Weren't things just as "dangerous" last year? Oh wait, last year the planet wasn't experiencing all the factors contributing toward food insecurity as we are this year as we hurtle with top speed toward the Great Reset. In other words, I must reluctantly conclude the timing is no accident.

The article continues: "Writing in Cardiovascular Research, a journal of the European Society of Cardiology, the authors said soil pollutants include heavy metals, pesticides, and plastics. They state that contaminated soil could then lead to increasing oxidative stress in the blood vessels, which in turn leads to heart disease. Dirty soil can get into the blood stream, through inhalation. Soil pollutants also flow into rivers, making dirty water, which may later be consumed. Pesticides were also linked to cardiovascular disease. ... The experts said: 'Although soil pollution with heavy metals and its association with cardiovascular diseases is especially a problem low- and middle-income countries since their populations are disproportionately exposed to these environmental pollutants, it becomes a problem for any country in the world due to the increasing globalization of food supply chains and uptake of these heavy metals with fruits, vegetables and meat.'"

The article obliquely points a finger at China's poorly regulated heavy-mining industry, which can produce hazardous airborne dust that can then contaminate soil in other countries. "Until we know more," the article concludes, "it seems sensible to wear a face mask to limit exposure to windblown dust, filter water to remove contaminants, and buy food grown in healthy soil."

Five years ago I would have dismissed this research as an outlier of no importance to Aunt Mabel and Uncle Charlie's backyard carrots. But more and more often, we're seeing outlier "dodgy" science enshrined in national and international policy (see Holland). Next thing we know, governments are arresting people for stepping foot outside their homes and beating them up if they're not masked.

That's why the timing of this warning is so interesting. With the multiple blows to the planet's food security, is the scene being set to outlaw gardening? Is this an additional attempt to nationalize food supplies? I suppose this is where I have to trot out the obligatory quote from Henry Kissinger: "Who controls the food supply controls the people; who controls the energy can control whole continents; who controls money can control the world."

Meanwhile, unless you're downwind of a cadmium mine in China, I encourage everyone to defy the doomsayers and start your own personal revolution by planting a garden in the backyard. As the awesome "Gangsta Gardener" Ron Finley famously said, "Gardening is the most therapeutic and defiant act you can do. Plus you get strawberries." Preach it, brother. 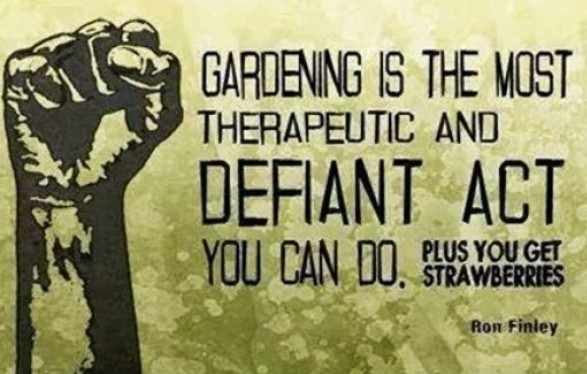