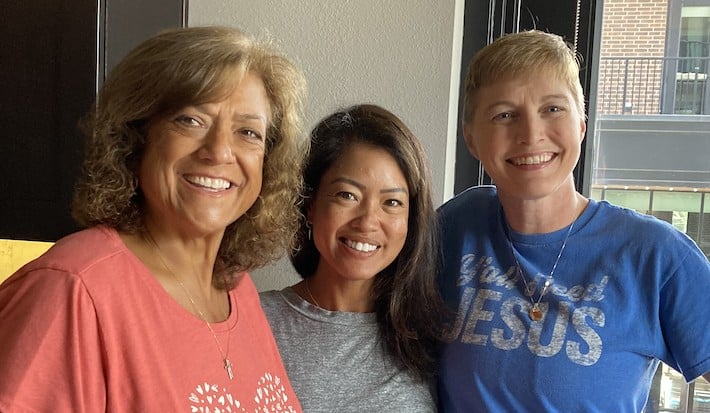 DALLAS – Leilani Lutali and Jaimee Fougner are alive, giggling and ready to fight for truth, justice and faith. I visited them this weekend at Baylor University Medical Center's aptly named post-kidney transplant surgery center called the Twice Blessed House. If not for their stubborn resistance and persistence, Leilani most likely would not have survived COVID tyranny – and Jaimee would be in mourning for her sister in Christ. Instead, we laughed, cried and wolfed down Texas barbecue along with friends and family.

Last October, I wrote about how University of Colorado Health officials cruelly and arbitrarily kicked Leilani off its transplant list after both she and Jaimee refused the COVID-19 vaccine on religious and scientific grounds.

"UC Health gave me a death sentence," Leilani reflected on Sunday. "Baylor gave me a chance" at life.

Leilani's kidney function immediately skyrocketed from 5% to 73% just days after surgery. Baylor University doctors told Leilani and Jaimee, who each underwent a three-hour-long procedure, that triathlete and former Air Force medic Jaimee's kidney was an "overachieving" marvel. The future is bright, and these charismatic women give all glory to their Creator.

"Without faith in Christ, we would not be sitting here today. We were either going to listen to men or listen to God, and we chose the path of God," Leilani told me. The dynamic duo wants the world to know their COVID vaccine defiance and survival story. They are now committed to battling religious and medical discrimination against Christians nationwide.

Leilani and Jaimee met at a Bible study group. They learned they had the same blood type and forceful personalities to match. "The two of us are stubborn as all get out," Leilani effused. "We don't take no for an answer." Both objected vehemently to the use of aborted fetal cell lines for production and manufacturing of COVID vaccines. Leilani had COVID two summers ago and possessed long-lasting antibodies, giving her natural immunity right up through surgery. Jaimee, a medical professional, conducted copious research on the legal, scientific, regulatory and ethical issues surrounding the experimental mRNA vaccines.

After UC Health kicked them to the curb, they found a surgeon at Medical City Healthcare in Dallas willing to consider their case. Hopes were high until Jaimee was informed that a few vessels found on her left kidney (most often used for transplants) disqualified her from surgery. Yet, both of her kidneys were perfectly healthy. Flummoxed but undeterred, Leilani suggested applying to nearby Baylor University, whose building signs Leilani had taken note of – providentially, she believes – during their stay. That was five short months ago. Baylor's compassionate and excellent medical providers moved quickly to enroll the duo. They confirmed Leilani's natural immunity and Jaimee's perfect match as a living donor. Their unvaccinated status was never an issue.

(Contrary to what UC Health told me in October, COVID vaccine mandates are not de rigueur at transplant clinics. In fact, an American Journal of Transplantation survey published in March found that the majority of clinics in the U.S. – 60.7% – did not require vaccination as a condition of surgery.)

Fortified by faith, Leilani and Jaimee now sat before me at the Twice Blessed House joking about Jaimee's super-kidney. Leilani named her lifesaving organ "Baby Baylee" in honor of the Baylor team that lives by the Hippocratic Oath abandoned by UC Health. In March, the law firm of civil rights lawyer and anti-medical mandates hero Aaron Siri sent a devastating 22-page letter to UC Health regarding its violation of Leilani's First Amendment-protected freedom of religion, violation of the Colorado Anti-Discrimination Act and arbitrary removal of Leilani from the transplant list despite her long-lasting natural immunity to COVID-19 and despite numerous studies showing that:

Siri, who spearheaded successful litigation forcing Pfizer to disclose thousands of pages of COVID-19 licensing data it wanted to hide from the public, noted Pfizer's admission of 158,893 internally reported adverse events after administration of its COVID-19 vaccine. Of course, he informed UC Health, "the magnitude of underreporting is unknown."

UC Health, which did not respond to my request for comment, told Siri's law firm in March that its "position remains the same." In other words: Comply or die.

Leilani and Jaimee refused to be bullied, intimidated or deceived. "The Bible tells us 365 times, 'Do not fear,' 'Do not be afraid,'" Jaimee reminded our gathering. The duo started a Facebook group cheekily titled "Medical mandates: Are you kidney me?" for transplant patients facing vaccine discrimination or adverse outcomes after being coerced to take the COVID jabs as a condition of surgery.

"It's been one gift, one opportunity for joy after another," Leilani said of their miraculous transplant journey. "We don't want people floundering in despair thinking there's nowhere for them to go. We know our job's not done. It's just begun."

Michelle Malkin
Michelle Malkin is author of "Open Borders, Inc.: Who's Funding America's Destruction?" Her email address is [email protected]
'-30-': An ending, but not the end
Justified parental fury over 'furries'
In support of a young J6 patriot the feds made a scapegoat
The Great Parental Replacement is underway: Buck it!
Our un-American 'justice' system
See more...