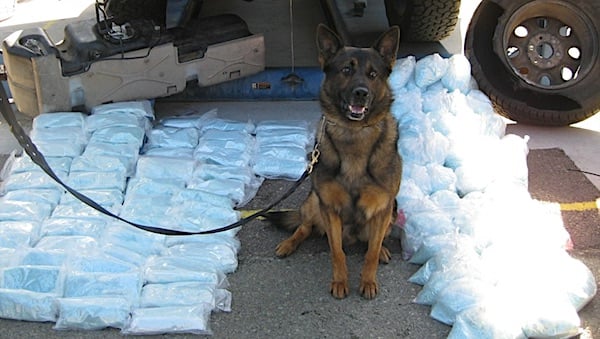 With the assistance of a drug-sniffing dog, U.S. Border Patrol seizes 250 lbs. of fentanyl with an estimated street value of $3.6 million during a vehicle stop in Campo, California, in July 2022. (U.S. Border Patrol photo)

The border agents confiscated the drugs after pulling over a U.S. citizen driver of a 2015 Black GMC truck near Campo, California, where a drug sniffing dog found multiple packages of fentanyl hidden in the car’s spare tire and its gas tank, according to CBP.

Using the DEA’s metric that one kilogram of fentanyl has the potential to kill 500,000 people, the seizure contained over 56 million doses. The seizure has an estimated street value of $3,679,000, according to CBP.

The population of California, Oregon and Washington combined is around 51,000,000, according to 2021 Census Bureau data.

CBP has confiscated over 8,400 pounds of fentanyl so far this fiscal year, according to the agency’s statistics.

Border Patrol seizes 250 lbs of Fentanyl with an est. street value of 3.6 million dollars during a vehicle stop in Campo, CA.

The smuggler and narcotics were turned over to the Drug Enforcement Administration (DEA) @DEASANDIEGODiv.

“Our agents prevented these dangerous narcotics from reaching our communities. I am proud to say that our Border Patrol agents here in San Diego Sector are responsible for over 50% of all the fentanyl seized by the U.S. Border Patrol this fiscal year,” Chief Patrol Agent Aaron Heitke said in a statement Monday.

The smuggler and drugs were handed over to the Drug Enforcement Administration (DEA), according to CBP.

Neither CBP nor the DEA responded to the Daily Caller News Foundation’s requests for comment.