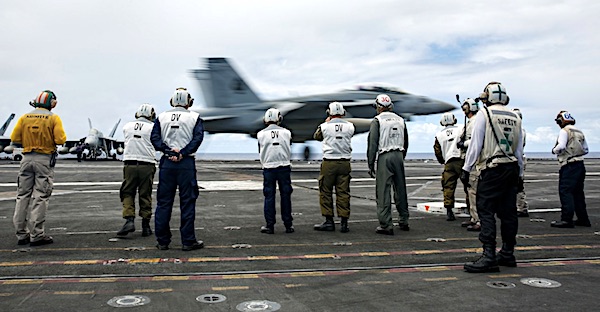 The U.S. military is readying for possible conflict in the Pacific ahead of House Speaker Nancy Pelosi’s possible trip to Taiwan in August, according to the Associated Press.

The Pentagon will escalate troop movements and security measures in the Pacific if Pelosi follows through with her planned Taiwan visit. China likely would not attack Pelosi’s plane directly, officials familiar with the matter told the AP, but senior officials worry that her presence could inflame existing tensions between the U.S. and China over Taiwan.

“If there’s a decision made that Speaker Pelosi or anyone else is going to travel and they asked for military support, we will do what is necessary to ensure a safe conduct of their visit,” Chairman of the Joint Chiefs of Staff Gen. Mark Milley told the AP. “And I’ll just leave it at that.”

Officials declined to provide specifics but said measures could include fighter jets, ships and surveillance equipment to create redundant shields around Pelosi. China threatened to impose a no-fly zone over Taiwan if Pelosi visits and has dispatched warplanes into Taiwan’s claimed air defense identification zone, CNN reported, as a possible countermeasure.

Pelosi would be the highest-ranking elected official to visit Taiwan in a quarter century, according to the AP. While enhanced security is typical of any high-level official visit to a foreign country, the precautions would go beyond those taken for trips to less risky destinations.

If she really dares to visit Taiwan, it will be a major serious incident. She will be the enemy that divides China. She will experience a risky visit. She will also bear historical responsibility for possibly triggering a military conflict in the Taiwan Strait. pic.twitter.com/pNXIRvtX0W

Tensions between the U.S. and China have escalated in recent months over conflict related to Taiwan, an independently-governed country that China perceives as part of the mainland.

Milley said Sunday that the number of dangerous interceptions between U.S. and Chinese forces in the South Pacific has escalated in 2022, and China has used unusually strong language opposing the U.S. ahead of Pelosi’s possible visit, Financial Times reported Saturday, citing six people with direct knowledge of the warnings.

“If the US side insists on making the visit, the Chinese side will take firm and strong measures to safeguard our sovereignty and territorial integrity,” Chinese Ministry of Foreign Affairs spokesperson Zhao Lijian said.

The Chinese foreign ministry and Pelosi’s office did not respond to the DCNF’s requests for comment.