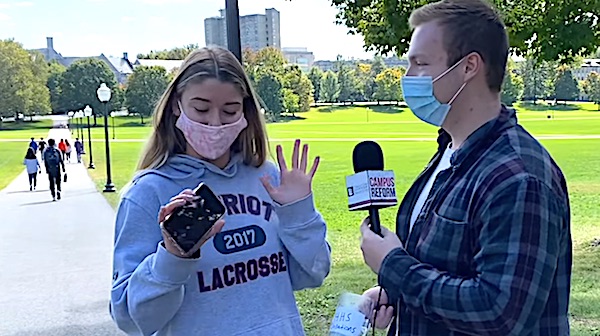 The Democratic candidate running for U.S. Senate in Arkansas is running on a platform that includes wiping away student loan debt, but a financial disclosure reviewed by The Daily Caller News Foundation shows the candidate herself has tens of thousands of dollars in outstanding student loan debt.

Natalie James, a realtor who will face off against Republican Arkansas Sen. John Boozman in November, has between $50,001 to $100,000 in outstanding student loans, her candidate filing with the Senate shows last Wednesday.

James graduated from the University of Arkansas at Little Rock, according to her campaign website. Her debt was incurred in 2003 and has a 2% interest rate for a 30-year period, the financial disclosure shows.

However, James supports “relieving the financial burden of student loan debt placed on many Americans,” according to her campaign website. James claimed in January she would “start” an “executive order to stop student loan interest” if elected to the Senate and waive away at least $20,000 of debt.

James’ campaign did not specify to TheDCNF any income limits in the candidate’s cancellation support, noting the conversation is “constantly evolving.”

It is unclear how the candidate would “start” an executive order. Such directives are issued by the president, who “manages the operations of the Executive branch of Government,” according to the Federal Register.

“Natalie James is aware that the power to issue executive orders lies solely with the President of the United States,” a spokeswoman for her campaign told TheDCNF. “The language of James’s Twitter thread on this matter could have been clearer.”

“Under Natalie James’ plan, a convenience store clerk or a retail associate who carries medical debt would be paying taxes in order to subsidize the student loans of a doctor or a lawyer,” Republican Arkansas state Rep. David Ray told TheDCNF. “The fact that she would personally benefit from such a proposal totally smacks of self-enrichment. She basically wants to conscript hardworking taxpayers and use their labor to pay off her own loans. What a sham.”

Republican Arkansas state Sen. Ben Gilmore questioned James’ motives “given there’s an apparent conflict” between the loan cancellation policy she has supported and her own debt. She clearly stands to benefit from the implementation of such a policy, Gilmore told TheDCNF.

House Republicans have also targeted Democrats who support student loan forgiveness while having debts of their own. Some GOP members recently demanded a probe into potential conflicts of interest among White House staffers who could benefit from such a policy.

Biden’s loan plan would waive away $321 billion worth of federal student loans for approximately 12 million borrowers. Senate Majority Leader Chuck Schumer has urged Biden to cancel $50,000 worth of debt, but the president said in April he is “not considering” that much.

The White House will likely unveil its decision on loan forgiveness in July or August, The Wall Street Journal reported, since that is around the time federal student loan payments become unfrozen. Biden has already canceled over $8 billion in student loans for public servants and will cancel roughly $6 billion worth for more than 200,000 borrowers who say they were defrauded, the outlet reported.

Boozman’s campaign declined TheDCNF’s request for comment. The White House did not respond.