I was reading a news report and poll on how Americans were united in worry over political and other divisions. The article reported how civility has gone downhill since Biden took office, voters say.

The 70th bipartisan battleground poll was conducted by Republican Ed Goeas of the Tarrance Group and Democrat Celinda Lake of Lake Research Partners, through Georgetown University's Institute of Politics and Public Service: "Asked which issues are the most or second-most important to [those polled], 23 percent responded the rising cost of living, 22 percent said the economy and 21 percent cited division in the country."

Part of that division involves Joe Biden's popularity and polls spiraling downward, resulting in new movement underfoot: a mass exodus from the Democratic Party, including within the U.S. House of Representatives. In June, it was reported that "more than a million voters across 43 states have left the Democratic Party and registered as Republicans in the last year," according to an analysis of voting data by the Associated Press.

I still remember in 1962, when I was 22 years old and a Democrat, watching Democrats (yes, Dems) on television chasing black Americans who wanted to go to a certain school, but the school was for only whites. I saw the radicals also chase these black Americans with attack dogs. As I told you, I was a Democrat, so I called the Democrat congressman at the time in Riverside, California, and asked him why they were chasing these young black Americans from the school. He explained to me that blacks have their own schools and whites have their own schools. I told him, that is not how the Republicans feel and it's not how I feel, so I must be a Republican not a Democrat!

To this day, while Dems claim to be the pro-minority political party, in actuality they use minorities and even migrants to stay in power and in reality suppress them. Republicans have historically been the party of those who fight for everyone's freedom, including freedom from government control through subsidies and entitlements, as I documented in a past three-part series of columns.

The Dems' control of minorities is what has caused the massive growth of the #Walkaway movement, through which countless Democrats are leaving their liberal party. My wife, Gena, and I congratulate Latino Republican Rep. Mayra Flores, who won a South Texas House seat held almost exclusively by Democrats for more than 100 years. We love her spirit and servant leadership. She's not bent on furthering the divides in America, but bringing us together.

Watching Flores' win reminded me again of our nation's original de facto motto (before "In God We Trust"): "E Pluribus Unum" (Latin for "Out of the many, one"). It is still on our currency as well. 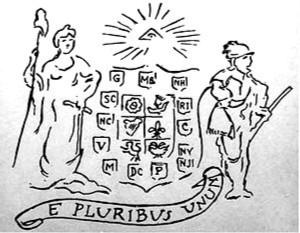 On July 4, 1776, the same day the Declaration of Independence was adopted by the Continental Congress, Thomas Jefferson, John Adams and Benjamin Franklin were appointed to a committee to "bring in a device for a seal for the United States of America."

GreatSeal.com explained their final work and proposal: "The below sketch of their design accompanied a detailed description of their idea for the new nation's official emblem.

"A motto's purpose is to express the theme of a seal's imagery – especially that of the shield."

The center section of this shield has six symbols for "the Countries from which these States have been peopled": the rose (England), thistle (Scotland), harp (Ireland), fleur-de-lis (France), lion (Holland), and an imperial eagle (Germany).

"Linked together around the shield are 13 smaller shields, each with the initials for one of the 'thirteen independent States of America.'"

Legal historian Tara Ross further explained, "They presented their report to the Continental Congress on August 20, 1776. Most of their proposals were not used in the final design for the seal, but two items were kept: The Eye of Providence and the Latin moto, 'E Pluribus Unum.'"

Ross further explained the likely origin and purpose from where Franklin, Jefferson and Adams adopted the motto, "E Pluribus Unum":

The Gentlemen's Magazine used the phrase in an annual volume that compiled stories from its twelve monthly editions. The Magazine posted the phrase along with a hand holding a bouquet of flowers. Each flower in the bouquet was different and unique, yet they came together as one lovely bouquet.

What a fitting picture of America. It's easy to see how our founding generation would have appreciated it. Each state, region, subculture and industry presents a different type of flower – as do different opinions, beliefs and religions. Together, the varied group of flowers makes a stunning bouquet.

America operates best when we remember that we don't all need to be roses. Daisies, tulips, marigolds … any number of flowers are also very beautiful.

E Pluribus Unum, by the way, also explains what the founding generation created the Electoral College. Roses don't get to rule the day, just because there are more of them. Daisies, tulips and marigolds are part of the bouquet, too.

As GreatSeal.com summarized, the motto E Pluribus Unum "shows that America was originally likened to a bouquet of different flowers, where unity and individuality coexisted – as opposed to a 'melting pot' that blended everyone together." Those individual flowers included our political opinions and preferences, too.

Deep and profound political divides are by no means new, but indeed go back to America's founding. This week even marks another important date in America's divisive wars, as history.com reported: "On July 11, 1804, in one of the most famous duels in American history, Vice President Aaron Burr fatally shoots his long-time political antagonist Alexander Hamilton. Hamilton, a leading Federalist and the chief architect of America's political economy, died the following day."

I was watching a few American historians the other day on television. They were saying, in actuality, there have been relatively few times in our country when we have been united like during the days of the Revolutionary War, during World War II and post-9/11. But it's often taken a disaster or war to bring unity. Why? Because it's only when we have a common enemy that we get our eyes off of ourselves and can let go of the differences that drive us apart.

In 1861, during his first inaugural address, President Abraham Lincoln spoke these words to a very divided nation like our own: "We are not enemies, but friends. We must not be enemies. Though passion may have strained, it must not break our bonds of affection. The mystic chords of memory, stretching from every battlefield and patriot grave to every living heart and hearthstone all over this broad land, will yet swell the chorus of the Union, when again touched, as surely they will be, by the better angels of our nature."

I might be an optimist but I'm not pollyannaish. I realize there's nothing (and I mean nothing ) easy about the Hatfields and McCoys or Aaron Burrs and Alexander Hamiltons in this life trying to get along. But the fact is Thomas Jefferson and John Adams re-created unity and even friendship even after their bitter decades-long divide.

I guess what I'm saying is that I believe and am still praying for "the chorus of the Union" to rise up again through "the better angels of our nature." I believe that America's united bouquet can bud again and its symphony can play again if we return to our roots, the Golden Rule and loving our neighbor as ourselves. We need to relearn the American art of agreeing to disagree agreeably – and not by demanding our way through a "summer of rage."

We may not be able to cause unity in Washington, but we can start in our neighborhoods, spiritual centers (local churches) and communities. And it all starts when we realize, reboot and reeducate ourselves and others that there are truly more things that unite us than those that divide us.

Chuck Norris
Chuck Norris is the star of more than 20 films and the long-running TV series "Walker, Texas Ranger." His latest book is entitled The Official Chuck Norris Fact Book." Learn more about his life and ministry at his official website, ChuckNorris.com.
Poverty a 'death sentence'? Not in America!
The new Miss Universe learned karate under me
Online sexual predators target our kids – learn to fight back!
Biden's bonkers & blind-as-a-bat first border visit
This New Year's resolution can make you healthier & happier
See more...