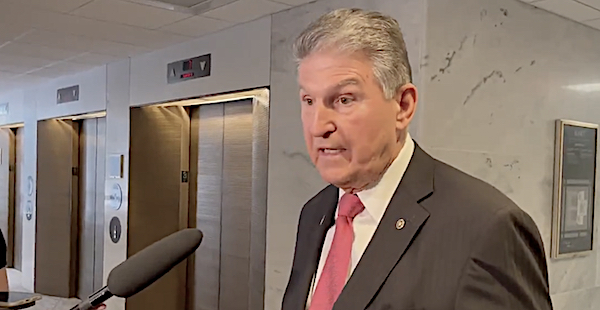 Democratic Sen. Joe Manchin is getting "blasted" by his constituents in West Virginia for agreeing to support President Biden's so-called Inflation Reduction Act, according to aides of the senator who spoke on condition of anonymity to Fox New Digital.

The pressure on Manchin can be seen in interviews in which drips of sweat run down his forehead as he is being challenged to defend the bill, the aides said.

"He is clearly defensive in his TV interviews, and he's getting blasted pretty hard in West Virginia," said one Senate committee staffer.

Critics of the Inflation Reduction Act describe it as a slimmed down version of the "Build Back Better" climate-change-oriented bill that Manchin rejected, charging it will raise the cost of energy and tax the middle class just as they are being hit with record inflation.

Wow - Watch the fireworks between Harris Faulkner and Joe Manchin after Harris GRILLS him on the "Inflation Reduction Act" pic.twitter.com/UAUbLLcuhH

Senate Majority Leader Chuck Schumer says it would generate $739 billion in revenue, cut the deficit by about $300 billion and spend $433 billion on climate-change measures while extending Affordable Care Act subsidies.

Meanwhile, the other Democrat holdout in the 50-50 chamber, Sen. Kyrsten Sinema, D-Ariz., said in a statement Thursday night she has struck a deal with fellow Democrats on the bill. The deal came after Democratic Party leaders agreed to remove a tax increase on carried interest and a 15% minimum tax on wealthy corporations.

Schumer said after Sinema's statement he believes he now has the support of the entire Democratic caucus, which would pass the bill. The agreement with Sinema, he said, "preserves the major components of the Inflation Reduction Act, including reducing prescription drug costs, fighting climate change, closing tax loopholes exploited by big corporations and the wealthy, and reducing the deficit by $300 billion.”

President Biden contends the bill will help curb inflation by lowering the budget deficit and subsidizing health and energy costs. The president said "126 economists wrote that the Inflation Reduction Act would lower costs for families, set the stage for strong economic growth, and tackle the climate crisis."

Biden also has claimed the bill will not increase taxes for those making less than $400,000. However, the non-partisan Congressional Joint Committee on Taxation (CJCT) concludes taxes would go up for every middle-income tax bracket, including those making under $10,000 and between $30,000-$40,000.

The Republican National Committee posted a video montage with Biden promising not to raise taxes on the middle class.

"I GIVE YOU MY WORD AS A BIDEN": Joe Biden repeatedly promised middle-class Americans would not "pay a penny more in taxes" under his administration.