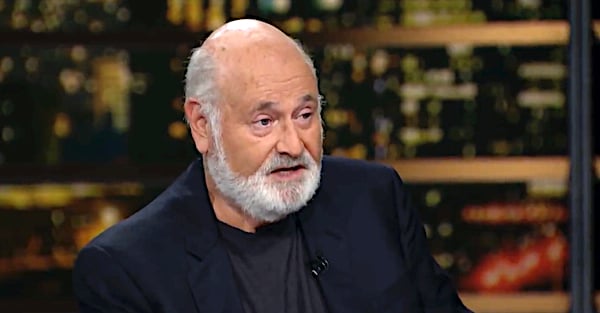 Maher noted that Harris – in defending the social media and news media suppression of damning evidence against Joe Biden on his son's laptop in an interview last week – essentially declared "the other side is so evil, anything is justified in preventing them from taking office."

"Is it?" Maher asked Reiner and Klobuchar.

"No," Reiner replied while quickly pivoting to the Jan. 6 Capitol riot.

As the audience applauded Reiner's statement, Maher posed another question.

"Was it appropriate to bury the Hunter Biden story?"

That story, Maher continued, was buried before the election because "they were like, 'We can't risk having the election thrown to Trump."

"We'll tell them after the election."

Reiner replied, "And we know for a fact that that's what they did?"

"I know," Maher replied, "because you only watch MSNBC."

The audience laughed and applauded as Reiner protested, insisting he also watches Fox News and that he did know about the laptop story.

"But the point is," Reiner said, "we're going to prove now that the press tried to –

"They're admitting it," Maher interrupted.

"I don't know that they've all said this," the Minnesota Democrat said. "I believe strongly in the First Amendment. My dad was a reporter. I believe in it."

She said "you have to make sure that you're treating people fairly," she continued."

"But I think Rob's point here is that we are dealing with a man who used to be the president right now, who literally tried to lead an armed insurrection."

In fact, amid the violence on Jan. 6 – for which there is evidence of incitement by federal informants and Antifa agitators – the constitutional, check-and-balances process of contesting certain state votes and seeking to have them returned to legislatures for vetting was thwarted, working against Trump's interest. The FBI found no evidence of any coordinated conspiracy to overthrow the election, Reuters reported last August.

This is extraordinary. Maher confronts Klobuchar and Reiner with an undeniable fact and they can’t help but sputter “January 6th!” They’re confirming what we all understand. Nothing matters as long as Trump and Rs are defeated. Whatever it takes. pic.twitter.com/3h6iEjN4pR

In an interview released last Wednesday, the "new atheist" philosopher and writer Harris contended the "left-wing conspiracy" to cover up the evidence that Joe Biden was running a global, multi-million dollar business trading on access to the White House with Communist Chinese officials, Russian and Ukrainian oligarchs and others was "warranted" because it prevented Trump's reelection.

"Hunter Biden literally could have had the corpses of children in his basement, I would not have cared," said Harris.

"There's nothing, it's Hunter Biden, it's not Joe Biden," he said, ignoring evidence such as the 10% cut reserved for Joe Biden in a Chinese energy firm at the forefront of Communist Party General Secretary Xi Jinping's effort to spread Beijing's influence worldwide.

"Whatever the scope of Joe Biden’s corruption is ... it is infinitesimal compared to the corruption we know Trump is involved in. It's like a firefly to the sun," he said.

Harris – one of the "Four Horsemen" of the new atheist movement along with Richard Dawkins, Daniel Dennett and the late Christopher Hitchens – is largely known now as a member of the "intellectual dark web," a loose association of "small-l liberals" who oppose postmodernism, post-structuralism, Marxism and political correctness. Among them are Bret Weinstein, Jordan Peterson, Joe Rogan, Dave Rubin, Ben Shapiro and Michael Shermer.

Harris insisted the allegations of impropriety against Trump University are "worse than anything that could be in Hunter Biden’s laptop, in my view."

"Now that doesn’t answer the people who say 'it's still completely unfair to not have looked at the laptop in a timely way and to have shut down the New York Post's Twitter account," he said.

Harris acknowledged the censorship by social media of the Post's blockbuster stories and their dismissal by establishment news media was a "left-wing conspiracy to deny the presidency to Donald Trump."

"Absolutely it was. But I think it was warranted," he said.

News media relied on a statement by 51 former top national security officials who declared the laptop and the circumstances of its disclosure had the "hallmarks" of a Russian disinformation operation.

Nearly a year and a half later, however, the New York Time acknowledged that 22,000 emails from the laptop are authentic.

In April, the New York Post reported a grand jury witness in the investigation of Hunter and his business dealings was asked to identify the "big guy" who, according to an email on the laptop, was to receive a 10% cut of a deal with the Chinese Communist Party energy firm. Former Hunter Biden partner Tony Bobulinski says the "big guy" was Joe Biden. And the author of email, business partner James Gilliar, said the same.

In the interview last Wednesday, Harris was confronted with the fact that he was asserting there is justification for using nefarious means to prevent a candidate from being democratically elected.

It "doesn’t matter," he replied, if it prevents an "existential threat" to the nation.

He clarified that Trump is "not going to destroy the world" and no one should "stuff ballots or actually break the machinery of democracy."

"But political opinion is already being completely inundated with misinformation, biased takes, half-truths and outright lies," he argued.

The honesty is both refreshing and disturbing

Meanwhile, one of the lead investigators in the Senate of the Biden family influence-peddling operation, Sen. Ron Johnson, R-Wis., said it's clear Biden has been "lying through his teeth" about his role.

Johnson was asked by Fox Business Network host Larry Kudlow if there was "any doubt" in his mind that President Biden "knew and was involved in Hunter Biden's business deals."

"No. None, whatsoever," Johnson replied. "Senator Grassley and I proved that conclusively in our report. Then, of course, Tony Bobulinski came forward, an eyewitness to the fact that Joe Biden was involved in those discussions."

The laptop, the senator said, is a "treasure trove of information."

"We have photographs of Joe Biden with Hunter Biden's business associated, voice mails from Joe Biden," he continued.

"No, it's clear that Biden was lying through his teeth to the American public, but the complicit and corrupt media continued to cover up for him."

IMPORTANT NOTE: How is it possible that the greatest and freest nation in world history has so rapidly come under the control of serially lying, deranged, power-mad sociopaths – leaders with nothing but contempt for America, for its history, its Constitution, its Judeo-Christian culture and its people? Orwell's “1984” points directly to the answer: The elites are changing America's language itself, so that people's words – and therefore, their very thoughts – inevitably come under the control of the ruling class. It's a way of bending reality in real time, so that what is illusion appears to be true, while what is real and true appears to be lies, misinformation, “hate speech,” “conspiracy theories” and “extremism.” This extraordinarily powerful but little-understood weapon of war employed 24/7 by the Marxist left is completely explained, exposed and exploded in the August issue of WND's acclaimed monthly Whistleblower magazine, “NEWSPEAK 2022: How tyrants and lunatics are enslaving Americans by redefining everything.”