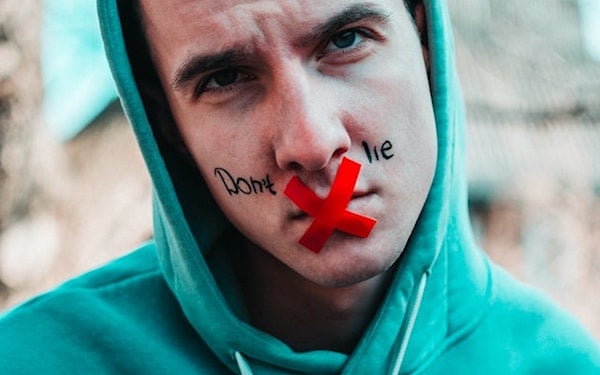 (Photo by Taras Chernus on Unsplash)

How is it possible, millions of Americans are wondering right now, that the greatest and freest nation in history has so rapidly come under the almost complete control of serially lying, deranged, power-mad sociopaths? Leaders with nothing but contempt for America, for its history, its Constitution, its Judeo-Christian culture and its people.

How, they wonder, is the current ruling class continually able to concoct and carry out such staggeringly destructive policies? How can they get away with decimating America’s economy and purposely paralyzing its energy sector? With tearing down the nation’s borders and flooding it with endless millions of illegal aliens? With continually demonizing the least racist, most successful multiethnic nation in the world as somehow irredeemably racist?

And how do they get away with promoting widespread child sexual abuse, including encouraging young people to “identify" as "transgender” and have various body parts surgically amputated? How do they get away with daily branding normal, law-abiding, hard-working, Bible-believing Americans as “violent extremists” and “domestic terrorists” and throwing many innocent people into jail, while refusing to prosecute actual “domestic terrorists,” “violent extremists” and other dangerous criminals?

To pose the question differently: By what dark magic are today’s power-obsessed oligarchs mysteriously enabled to successfully distract, seduce, mesmerize and persuade so many Americans, as the Bible puts it, to “call evil good, and good evil,” to “put darkness for light, and light for darkness,” and to “put bitter for sweet, and sweet for bitter,” thereby enabling them to successfully wage an insane Marxist revolution in America, once the “sweet land of liberty”?

What is their secret weapon?

George Orwell’s classic novel “1984” points directly to the answer: While all the usual tactics of would-be tyrants and dictators are playing their usual role in today’s America – from bribing supporters and collaborators and promising them ever more advantages, to demonizing opponents and weaponizing all the institutions of government against them – one utterly devastating additional element enables all the other tactics to work. Yet it remains, for many people, largely undetected and invisible:

The elites are changing America’s language itself, so that people’s words – and therefore, their very thoughts – inevitably come under the control of the ruling class. It’s a way of bending reality in real time, so that what is illusion appears to be true, while what is real and true appears to be lies, misinformation, “conspiracy theories” and “extremism.”

Thus, the unprecedented, banana-republic-style raid on the home of former President Donald Trump by dozens of armed FBI agents was, you see, not a raid at all, insists the Ministry of Truth (i.e., virtually the entire elite media). “The execution of a search warrant isn’t a raid,” Americans are told, condescendingly. “It’s a judicially overseen process!”

So the massive and unannounced armed raid on a U.S. president’s home “wasn’t a raid.” But the Jan. 6, 2021, demonstration in the U.S. Capitol by that same president’s supporters, concerned that the 2020 election had been stolen, was an “insurrection.” And not just any “insurrection,” but an event on the same level of infamy, insisted Vice President Kamala Harris, as the raid on Pearl Harbor and the 9-11 terror attacks, each of which killed thousands of innocents. New definitions of words change everything.

In the exact same way, the American economy that is currently driving many middle-class folks into bread lines isn’t in a “recession,” the Ministry of Truth insists. Because you see, there’s a whole new definition of “recession,” since the elites just dumped the old one. The economy is fine – and actually improving every day, Americans are told.

But what about the sky-high inflation? Even though food, gas, housing and other key expenses like cars and building materials are through the roof, some of them 20% and 30% higher than before the Biden era, the official inflation rate is around 8.5%. Why? Because the federal government – that is, the entity responsible for creating the inflation – has redefined the Consumer Price Index. If 1980s’ CPI was still used to calculate today’s inflation, say many economists, the “official” inflation rate would be perhaps twice as high as what Americans are being told.

Well, at least the COVID pandemic seems to be waning, thanks to the vaccines, right? Wrong. In reality, the new, experimental mRNA gene-therapy drugs the government forced on the vast majority of Americans do not work, as even its key salespeople like Anthony Fauci and Deborah Birx now openly admit. But wait: All vaccines prevent people from contracting a particular disease and from transmitting it – that’s literally what vaccines do. How, then, can these shots, which we now know do not work as promised, possibly be called “vaccines”? That’s easy: The CDC quietly changed its official definition of “vaccine” in order to make the new vaccine definition fit what the flawed “COVID-19 vaccines” actually do.

These examples barely scratch the surface of the left’s Orwellian redefinition of history, politics, economics, science, culture, faith and morality – in other words, of reality – by radically messing with Americans’ language. Indeed, the ruling elite’s wild redefinition of terms like “racism,” “equity,” “justice,” “democracy,” “diversity,” “illegal alien,” “voter suppression,” “disinformation,” “domestic terrorist,” “violent extremist,” “insurrectionist,” “marriage” and scores of other terms – including, of course, “woman” – has turned America upside down, a condition they confidently now define as right-side up.

Thus are today’s oligarchs able to change the way millions of people think – indeed, to force a new way of perceiving, believing and acting on much of the country’s population.

This extraordinarily powerful but little-understood weapon of war employed 24/7 by the Marxist left is completely explained, exposed and exploded in the August issue of WND’s critically acclaimed monthly Whistleblower magazine, titled “NEWSPEAK 2022: How tyrants and lunatics are enslaving Americans by redefining everything.” 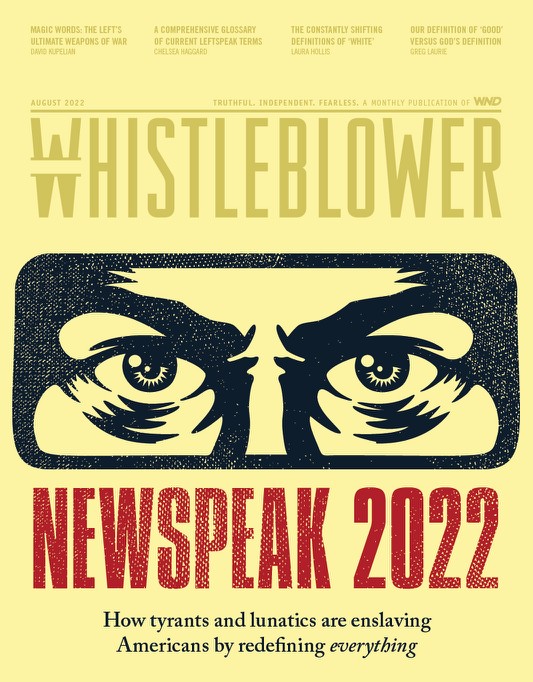 “This massive Orwellian tampering with language on the part of would-be tyrants,” says author and Whistleblower Editor David Kupelian, “may not be quite as necessary in a nation that has never known freedom. But in America, where tens of millions of citizens are very well acquainted with genuine, God-blessed liberty – and its language – the ruling elites find it necessary to redefine, and thereby corrupt the meaning of, everything in order to implement the real insurrection. Theirs.”

Highlights of “NEWSPEAK 2022” include:

* “A comprehensive glossary of current LEFTSPEAK terms” by Chelsea Haggard. Step inside the mind of today’s Democrats. Here’s what they really mean

* “CDC says it changed the definition of ‘vaccine’ – to be 'more transparent'” by Art Moore. As one congressman noted: “They've been busy at the Ministry of Truth”

* “Woke language: Orwell's 'newspeak' is here” by John Stossel, who says, “It's hard to keep up with what's OK and what's forbidden”

* “The left's ongoing, absurd redefinition of words: From 'infrastructure' to 'bipartisan' to 'affordable health care,' many terms now mean their opposite” by Sean Harshey

* “‘Crush anyone that opposes our belief’: Leftists weaponize 'marriage' definition,” by Bob Unruh, on how the faithful are becoming targets of the federal government

* “Racism's absurd new dictionary definition” by Dr. Michael Brown, on how Merriam-Webster agreed to change its long-standing definition after a complaint from 1 person!

* “Honesty is such a lonely word in Washington” by Star Parker, on how D.C.’s “word-game culture” is based on an obsession with redefining reality

* “Our definition of 'good' vs. God's” by Greg Laurie, on how “the Lord uses our trials and sufferings to bring us closer to Him.”

“NEWSPEAK 2022,” says Kupelian, “is dedicated to pulling the veil off this mostly below-the-radar attack on Americans’ language – and thereby on their thinking, and ultimately on their very sanity and happiness.”

Next, you’ll get the state-of-the-art digital edition of Whistleblower’s blockbuster issue “THE REAL INSURRECTION: Branding normal Americans as ‘terrorists,’ Democrats pursue total revolution.” While Democrats’ fake “House Select Committee on the January 6 Attack” daily accuses law-abiding, patriotic, conservative Americans of being “domestic terrorists,” “violent extremists” and “insurrectionists,” a REAL INSURRECTION – indeed, a full-scale MARXIST “RESET” of the greatest nation on earth – is well underway in the United States of America, led by them. Remember the rule: Whatever today’s Democrats falsely accuse their critics of doing and planning, is precisely what they themselves are ACTUALLY doing and planning. It’s all revealed in “THE REAL INSURRECTION.”

You’ll also get the digital edition of a stunning new Whistleblower report documenting an almost unbelievable trend, “ELITES FINALLY REVEAL THEIR #1 ENEMY: CHRISTIANS.” It reveals how the political, cultural and sexual revolutionaries responsible for all of America’s current chaos and madness have finally dared to “come out” and publicly identify exactly who they really consider to be their biggest enemy: Bible-believing, Judeo-Christian morals-affirming Christian believers – the kind who founded America, wrote her Constitution, and defended her with their lives for centuries. They are now considered the biggest enemy threatening the future of America! It’s exposed more clearly than ever in “ELITES FINALLY REVEAL THEIR #1 ENEMY: CHRISTIANS.” 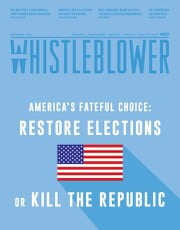 Finally, you’ll get the digital version of the all-important, forward-looking Whistleblower issue, “AMERICA’S FATEFUL CHOICE: RESTORE ELECTIONS OR KILL THE REPUBLIC.” Just months before the 2022 midterms, America is on the brink of total meltdown. Ignoring reality at every turn, today's leaders manifest an abiding contempt for biology, the lessons of history, the fundamental laws of economics, the transcendent value of human life, and especially, for God and His laws. With polls showing Americans are turning against the Democrats in droves, the party of Joe Biden and Kamala Harris, of Nancy Pelosi and Chuck Schumer, is planning on winning by the only means at their disposal: Cheating. Again. Which is why Whistleblower's special issue, “AMERICA’S FATEFUL CHOICE: RESTORE ELECTIONS OR KILL THE REPUBLIC” is must reading.

If you prefer, you may order a single copy of the August 2022 issue, “NEWSPEAK 2022.” Or GET THE DIGITAL VERSION HERE!