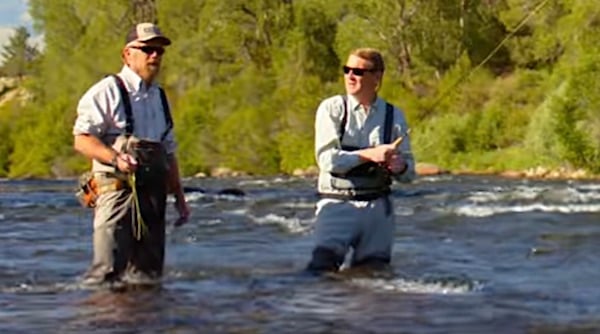 Sen. Michael Bennet released a campaign ad depicting him fly fishing in outdoor gear. However, the Colorado Democrat reportedly obtained a 24-hour fishing license to shoot the ad — according to Axios — raising questions about his everyday outdoorsman persona on the river.

“I’m Michael Bennet, I approve this message,” the senator says in the 30-second ad, which is titled “Reel Focused” and came out on Aug. 1. “And I caught that fish.”

Bennet’s campaign provided documents to Axios on the fishing license for a day on the Arkansas River, which flows through Colorado, the outlet reported. The senator released a prior ad on July 21 called “Common Sense” that also depicted him as an outdoorsman hiking in the mountains.

Bennet, who has a net worth of up to $31 million, according to a financial disclosure, appeared in the ad with a man named Greg Felt. Felt, who is strictly cited as a fly fishing guide, is also a commissioner in Chaffee County, Colorado, that was appointed by Democratic Colorado Gov. Jared Polis to the Colorado Water Conservation Board.

Bennet’s fishing ad comes on the heels of a Washington Free Beacon report on him purportedly misleading voters about “not taking a dime in corporate PAC money.” Bennet’s campaign raked in over $60,000 last quarter from PACs that have accepted corporate PAC money, the outlet reported.

Bennet will “likely” retain his Senate seat, according to Politico.

Bennet’s campaign did not respond to a request for comment.