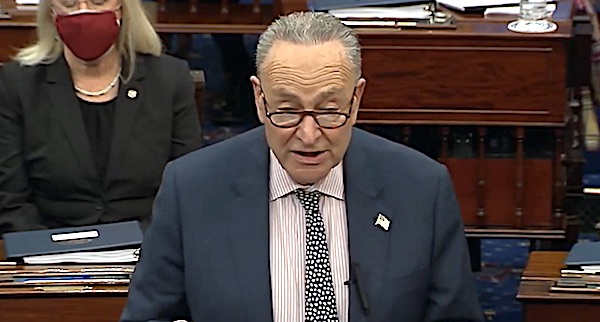 The Democrat-led climate bill signed into law Aug. 16 grew the Environmental Protection Agency’s (EPA) authority over energy after the Supreme Court limited it in June, the bill’s text shows, by defining carbon dioxide as an air pollutant.

The court’s decision in West Virginia v. EPA limited the EPA’s regulatory power and found that Congress had not authorized the agency under the Clean Air Act (CAA) to impose greenhouse gas emissions caps under the now-replaced Clean Power Plan to force a national transition away from coal power. Several of the Inflation Reduction Act‘s sections define the term “greenhouse gas” as “the air pollutants carbon dioxide, hydrofluorocarbons, methane, nitrous oxide, perfluorocarbons, and sulfur hexafluoride.”

Democrats who contributed to the climate bill and legal experts said it clearly authorizes the EPA to regulate greenhouse gases and push for renewable energy adoption by defining fossil fuel-generated carbon dioxide as an “air pollutant” in an amended Clean Air Act, according to The New York Times.

The language was opposed by Senate Republicans but survived their attempts to erase it, the outlet reported.

“[The EPA is] gonna try to use that as authorization that they can regulate carbon dioxide from coal plants because it has this casual mention of carbon dioxide and air pollutant in the same sentence,” JunkScience.com founder and Trump EPA transition team member Steve Milloy told the Daily Caller News Foundation. “I don’t think that that’s gonna fly, ultimately, but a lot of damage can be done in the meantime. Because it’s clear that there’s no definition there, it’s just sort of in a list, and it’s casually mentioned. There’s no section that says carbon dioxide is an air pollutant under the Clean Air Act.”

“They’ll probably do the same thing with ozone, and then they’ll use this authority somehow,” he said of the climate bill’s language on carbon dioxide. “EPA is gonna use every hook it thinks it has to crack down on greenhouse gas emissions. That’s why that definition was put in, because the Supreme Court said you need congressional authorization, and they don’t have any congressional authorization, not one. They have none, and that section doesn’t really give it to them, but they’re gonna pretend it does.”

American Enterprise Institute Senior Fellow Benjamin Zycher told the DCNF said it was unclear if language in the climate bill directing funds to dealing with carbon dioxide as a “pollutant” “satisfies the explicit delegation requirement for major questions as decided by the Supreme Court in West Virginia v. EPA.

“The argument that CO2 is an air pollutant under the traditional definition in the CAA is silly,” he said. “EPA is required under the CAA to promulgate an ambient air quality standard (AAQS) that ‘protects the public health’ with an ‘adequate margin of safety’ for an ‘air pollutant’ that EPA determines to be endangering the public health and safety. EPA made that determination for CO2 in 2009; but that was and remains preposterous, as there is no evidence that increasing CO2 (or CO2-equivalent GHG) concentrations are ‘endangering’ anyone, or creating a ‘crisis.'”

Brookings Institution Energy Security and Climate Initiative Director Samantha Gross tweeted, “I’m frustrated by voices on the right saying that Congress defining CO2 as a pollutant is an ‘end run’ around the recent WV v EPA Supreme Court decision. Congress sets laws, the courts interpret them. This is exactly what Congress is supposed to do!”

I’m frustrated by voices on the right saying that Congress defining CO2 as a pollutant is an “end run” around the recent WV v EPA Supreme Court decision. Congress sets laws, the courts interpret them. This is exactly what Congress is supposed to do!https://t.co/cYPr4TPLV4

The EPA did not immediately respond to the DCNF’s request for comment.