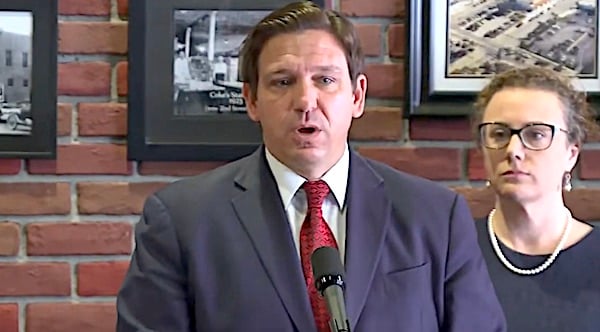 Florida Gov. Ron DeSantis, a rocketing star in the Republican Party, has come up with an idea for what a few of those 87,000 new Internal Revenue Service agents should be tasked with doing:

Auditing members of Congress who supported the creation of that army.

It is Joe Biden's "Inflation Reduction Act," which actually is forecast to not reduce inflation, that added billions of dollars to the IRS budget to add thousands of agents.

They are expected to put average low-income and middle-income Americans in their bull's-eye, violating Biden's campaign promise that on his watch no American making less than $400,000 a year would pay more taxes.

"Those IRS agents are going to be mobilized to go after people that the government doesn't like," DeSantis warned.

"You know they actually proposed an amendment when this was being debated in the U.S. Senate saying none of these agents can audit [those making] under $400,000 a year, and the Democrats voted that down. They did not want to protect Americans that are making under $400,000. The question is why would they not have wanted to do that."

He continued, "Because they want this to be something that is going after sole proprietors and handymen, and people that own restaurants, people that drive an Uber," he said. "So it's going to be those folks that are going to be least able to withstand an audit … because that's really the low hanging fruit. You go after that [and] you're probably going to be able to scrounge up a lot of stuff. So that's not a good thing for an economy. to be unleashing the IRS."

Further, he said the tax code is "incomprehensible," "so if they go after you a lot of times they're going to be able to find something , especially if you don't have an accountant or lawyers."

So what should the new army aim at?

"I thought it was really, really reprehensible that they be mobilizing 87,000 IRS agents and I think every member of Congress that voted for that bill should be required to be audited every year by the IRS." (WATCH:)