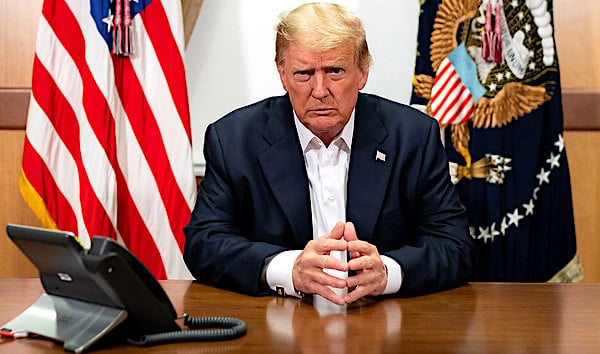 An affidavit used by the FBI as justification for its unprecedented raid on and search of President Donald Trump's Mar-a-Lago home in Florida, approved for released by a judge who already is the subject of an ethics complaint for his exhibited "hostility" to Trump, is largely blacked out.

The document was made public on Friday, and supposedly holds the allegations and claims that justified the raid on Trump's private residence, including justification for an FBI search of Melania Trump's clothes closet and a break-in of President Trump's office safe.

Left available for the public to see were segments concerning the "background" of the agents, where minor segments were blacked out, the "source" of the evidence, which an agent claims was based on "my personal knowledge," and "statutory authority and definitions."

Also allegations about "probable cause," a section which describes how Democrats in Washington insist that Trump had "unproperly" identified documents, was available. It confirms that the national Archives agency already had gotten boxes of documents from Trump, and discussions were ongoing for more.

But the next 21 pages are largely black, with only an occasional paragraph left available.

The FBI agent, whose identity also remains concealed, claimed, "Based on the foregoing facts and circumstances, I submit that probable cause exists to believe that evidence, contraband, fruits of crime, or other items illegally possessed in violation [of the law]" are at Mar-a-Lago. The "facts" were concealed.

But he allowed the Justice Department to censor massive sections of the document, providing Americans with little actual knowledge of the scheme assembled against President Trump.

The Biden Department of Justice has claimed, "There remain compelling reasons, including to protect the integrity of an ongoing law enforcement investigation that implicates national security, that support keeping the affidavit sealed."

"Affidavit heavily redacted!!! Nothing mentioned on 'Nuclear,' a total public relations subterfuge by the FBI & DOJ, or our close working relationship regarding document turnover — WE GAVE THEM MUCH."

He continued, "Judge Bruce Reinhart should NEVER have allowed the Break-In of my home. He recused himself two months ago from one of my cases based on his animosity and hatred of your favorite President, me. What changed? Why hasn’t he recused himself on this case? Obama must be very proud of him right now!."

Trump has called for the affidavit to be released in full.

"The political Hacks and Thugs had no right under the Presidential Records Act to storm Mar-a-Lago and steal everything in sight, including Passports and privileged documents. They even broke into my safe with a safecracker - Can you believe?" he wrote on social media.

"This Act was created for a very good reason, and it works. We are right now living in a Lawless Country, that just so happens to be, also, a Failing Nation!"

The DOJ, which also was involved in the now-debunked 2016 scheme in which Democrats made up claims that Trump's campaign was colluding with Russia, now has claimed that Trump may have had national defense information.

They also claim the presence of classified documents, even though Trump has said he ordered documents he has declassified.

Trump has asked for a special master to review what likely are privileged documents that the FBI took, as well as his personal documents, such as his passports that they took.

Trump has already pointed out the odd actions of the agents.

"They demanded that the security cameras be turned off, a request we rightfully denied. They prevented my attorneys from observing what was being taken in the raid, saying 'absolutely not.' They took documents covered by attorney-client and executive privilege, which is not allowed. They took my passports. They even brought a ‘safe cracker’ and successfully broke into my personal safe, which revealed…nothing!"

Trump supporters have charged that this is nothing more than a political attack by Biden on the leading candidate for president in 2024.

"Law enforcement is a shield that protects Americans. It cannot be used as a weapon for political purposes," Trump's motion said.

WND previously reported a complaint that has been filed in the Judicial Council of the 11th Circuit targets Reinhart.

Jenny Beth Martin, the CEO of the organization, explained in the complaint that, "Bruce Reinhart had it out for Trump," the report said.

She said in the filing, "Judge Reinhart has a conflict of interest and a pattern and history of hostility to President Trump."

Listed were several examples, including social media attacks on Trump and donations to anti-Trump critics, including Obama.

Bedard said he obtained a copy of the complaint, and noted that it seeks to have the judge removed from the case – even the bench.

"Judge Reinhart should be disciplined and removed as a federal magistrate because of his failure to meet the standards of ethical conduct and character necessary for the public to have confidence in the nonpartisan role of a judge in a matter of this extreme public interest," said the recitation of his apparent ethics failures.

Bedard reported, "Critics of his earlier action to OK the search for classified documents inside the resort have dug up ample evidence of Reinhart’s anti-Trump liberal past, including donations and social media attacks. Martin also cited a case involving Hillary Clinton in which Reinhart recused himself as an example that he should have followed in the Mar-a-Lago case."

The complaint bluntly charges, "The entire episode of the unprecedented search of the former president’s home, authorized by a political appointee of President Trump’s successor, and approved by a federal magistrate who has been outspoken in his opposition to and loathing of President Trump threatens the principle of ‘equal justice under law’ and the confidence of the American people in an unbiased judiciary."

A poll this week, incidentally, showed that in a rematch in 2024 of the race between Trump and Biden, Trump would win.