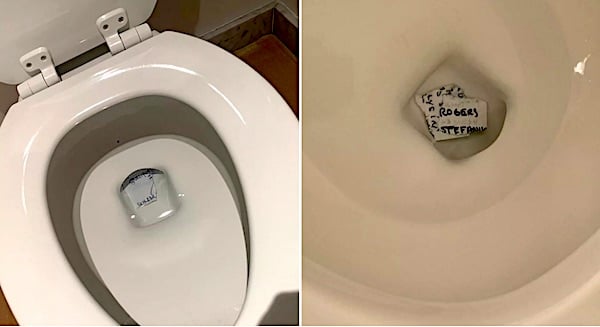 Papers in toilets that are claimed to have been placed there by Donald Trump. (Photos courtesy Maggie Haberman via Twitter)

A New York Times writer who is promoting a new book claims that photographs in the book show toilets in the White House containing documents that President Trump "flushed."

Trump has rejected the claims from Maggie Haberman, who claimed to have gotten photographs of "presidential notes stuffed into the residence toilets from a former White House official who worked under the previous administration."

The Daily Mail pointed out the images "allegedly depicting Donald Trump's toilets," were published by Axios.

The papers "appeared to be handwritten rather than official documents," the report explained.

"One of the ripped up papers on top of a stack in the toilet shows what appears to be lawmakers names scrawled down in all capital letters in black sharpie," the report said. "Two names can be seen clearly on the paper – Rogers and Stefanik – although the rest of the torn up papers are mostly illegible. "

A Trump representative, Taylor Budowich, told Axios, "You have to be pretty desperate to sell books if pictures of paper in a toilet bowl is part of your promotional plan."

He continued, "There's enough people willing to fabricate stories like this in order to impress the media class — a media class who is willing to run with anything, as long as it anti-Trump."

Haberman told CNN that the point is "about the destruction of records which are supposed to be preserved under the presidential records act."

Are these papers in toilets part of another media-fueled hoax to make Donald Trump look bad?
99% (861 Votes)
1% (9 Votes)

Haberman said she has had "additional reporting" that the destruction of notes happened on foreign trips as well as "in the White House."

When the claims first surfaced a few months ago, Trump said the story was "categorically untrue and simply made up by a reporter in order to get publicity for a mostly fictitious book."

The Daily Mail report admitted, "There has been no conclusive proof that Trump flushed official White House documents or otherwise during his time in office."

On social media, Haberman boasted about, and published, the images of toilets.

"The photos, which were obtained by Haberman from alleged White House sources, are purportedly document pieces from the White House and also 'an overseas trip,'" the report said.

"A former senior White House staffer told the Daily Caller News Foundation they are 'highly suspicious' of the new report detailing the alleged documents Trump threw in toilets," the report explained. "'This is one of those stories that is virtually impossible to prove, but that won’t stop the leftwing media from running with it as a verifiable and undisputed fact,' said the staffer."