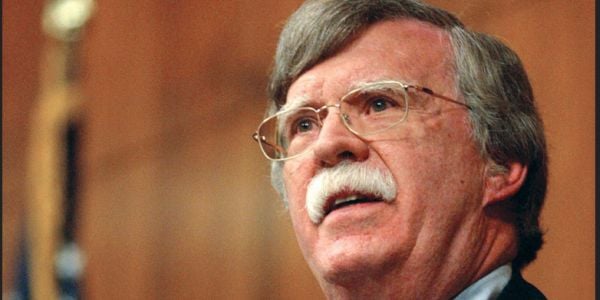 The U.S. Department of Justice has announced that a member of Iran's Islamic Revolutionary Guard Corps has been charged with the use of interstate commerce facilities "in the commission of murder-for-hire and with providing and attempting to provide material support to a transnational murder plot."

In a statement after the DOJ announced the case against Shahram Poursafi, who allegedly acted in retaliation for the U.S. strike in January 2020 that killed Iranian Quds Force leader Qassem Soleimani, Bolton issued a statement: "While much cannot be said publicly right now, one point is indisputable: Iran’s rulers are liars, terrorists, and enemies of the United States."

"The Justice Department has the solemn duty to defend our citizens from hostile governments who seek to hurt or kill them," Assistant Attorney General Matthew G. Olsen of the Justice Department’s National Security Division said in a prepared statement. "This is not the first time we have uncovered Iranian plots to exact revenge against individuals on U.S. soil and we will work tirelessly to expose and disrupt every one of these efforts."

The DOJ explained, "Poursafi approached a U.S. resident he had met online and asked for pictures of the former national security adviser, claiming the pictures would be used for a book he was writing. The resident connected Poursafi to someone willing to take the pictures for $5,000-$10,000."

Then, the case charges, Poursafi reached out to another person "over encrypted messaging applications and offered $250,000 to hire someone to 'eliminate' Bolton, an amount that was eventually negotiated to $300,000."

The suspect also alluded to another "job" that could pay $1 million in the future.

The case charges that Poursafi delivered instructions to use a small weapon.

"Iran’s Islamic Revolutionary Guard Corps, through the Defendant, tried to hatch a brazen plot: assassinate a former U.S. official on U.S. soil in retaliation for U.S. actions," said U.S. Attorney Matthew M. Graves for the District of Columbia in a press release. "Iran and other hostile governments should understand that the U.S. Attorney’s Office and our law enforcement partners will do everything in our power to thwart their violent plots and bring those responsible to justice."

The DOJ noted that the orchestrations started in late 2021, and Poursafi also was known as Mehdi Rezayi, 45, of Tehran, Iran.

The DOJ said its court documents charge that Poursafi told a "confidential human source" that it would not matter if the killing was attributed to Iran.

Poursafi also allegedly insisted that the death happen quickly, and repeatedly pressed the "CHS" for action.

If convicted, Poursafi could face 10 years in prison for using interstate commerce facilities in the commission of murder-for-hire, and up to 15 years imprisonment and a fine up to $250,000 for providing and attempting to provide material support to a transnational murder plot.

He remains at large.