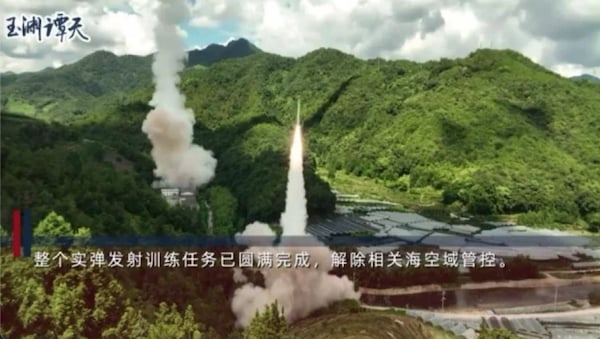 At least five missiles landed in Japanese territory to the north and east of Taiwan, according to the Japanese Ministry of Defense. It's the first time a Chinese missile has struck inside Japan's exclusive economic zone, which affords exclusive rights to fishing and other enterprises.

Taiwanese President Tsai Ing-wen said in a video address Thursday that China "destroyed the status quo and violated our sovereignty" with its "irresponsible actions."

"We are calm and not impulsive, we are reasonable and not provocative," she said. "But we will also be firm and not back down."

Taiwan's Defense Ministry said it is on alert in response to China's "irrational behavior."

"The three service branches will combine efforts with all the people to jointly safeguard national security and territorial integrity," the statement said.

Secretary of State Antony Blinken told reporters Thursday the United States "continues to have an abiding interest in peace and stability across the Taiwan Strait."

"We oppose any unilateral efforts to change the status quo, especially by force," he said.

Pelosi: A message for China
On Wednesday, despite a warning of military retaliation by Beijing, Pelosi visited Taipei with a congressional delegation as part of their Asia tour. Pelosi said the purpose of the visit was to make it "unequivocally clear" that the United States would "not abandon" Taiwan.

President Biden, however, said the previous week he thought the U.S. military believed a Pelosi visit to Taiwan was "not a good idea right now." Pentagon spokesman John Kirby said Monday that as the leader of a separate branch of government, "the speaker makes her own decisions."

"What we did was provide her context, analysis, facts, information, so that she can make the best decision possible, for every stop, for every overseas travel," he said.

Asked on Monday what kind of measures the PLA might take, Zhao said: "if she dares to go, then let us wait and see."

Last Friday, a prominent journalist connected to the Chinese Communist Party wrote that if Pelosi's plane is accompanied by U.S. fighter jets, it should regarded as an "invasion," and the speaker's plane should be shot down.