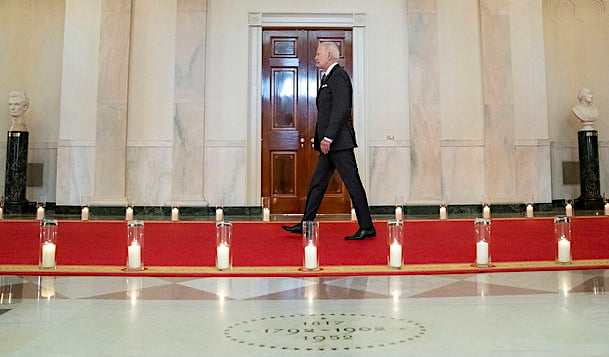 Joe Biden walks through the Cross Hall of the White House, Thursday, June 2, 2022, prior to delivering remarks on gun violence. Fifty-six candles are illuminated in honor of victims in each state and U.S. territory. (Official White House photo by Erin Scott)

The U.S. Department of Justice and its FBI have played leading roles in many of the biggest scandals in the nation in recent years.

There were those false claims about President Donald Trump's 2016 campaign "colluding" with Russia.

There was the hands-off handling when Hillary Clinton erased emails that already had been subpoenaed.

And then there was the politicized FBI raid on Trump's home in Florida, where federal agents demanded Trump's lawyers leave, and they went behind closed doors to break into a safe, rifle through Melania Trump's clothes and, according to reports, much worse.

So where does this trend of partisan law enforcement lead?

To Nicaragua, according to John Daniel Davidson, who wrote in the Federalist, where he is senior editor.

Or, perhaps, he suggested, Argentina. Or Bolivia. Or El Salvador. Or others.

"The criminal indictment and imprisonment of former heads of state by ruling regimes in other countries is more common than most Americans probably realize. Today, former presidents of Argentina, Bolivia, El Salvador, Colombia, Guatemala, Panama, Peru, Paraguay, and Costa Rica are all imprisoned — and that’s just in Central and South America," he explained.

And that's where the Biden DOJ and FBI are leading the nation, he suggested.

"This is about one thing and one thing only: holding onto power by any means necessary. There is nothing particularly subtle or nuanced about it. If you want to know where it leads, check out Nicaragua," he said.

He explained the way the thuggery works, where corrupt leaders criminalize their opponents and jail them in order to stay in power.

"That’s why, for example, Daniel Ortega has been president of Nicaragua since 2007. When you jail your political opponents and potential rivals, as Ortega did with gusto ahead of Nicaragua’s 2021 presidential election, it’s easy to stay in office."

"On Monday evening, dozens of FBI agents raided the Florida home of former President Donald Trump. The absurd pretext for the raid was a dispute over documents with the National Archives — a circumstance by no means unique to the Trump administration and one that no serious person believes could ever justify such a raid," he explained.

"Everyone in America knows the real reason for the FBI raid: to tarnish Trump as unfit for office and to intimidate and dissuade him from running again in 2024. Nothing like this has ever happened in American history. Sen. Marco Rubio, R-Fla., was exactly right to compare the FBI raid to the kind of thing you see in Ortega’s Nicaragua. It’s what ruling regimes do to rob the people of their voice and avoid the consequences of elections," he said.

Because one day what goes around is going to come around

And then we become Nicaragua under Ortega pic.twitter.com/LwODnsYtcr

Davidson said the raid was just the latest front in the Democrats' war against President Trump.

"This was around the same time Milley was making phone calls to a Chinese general to reassure Beijing that Trump wasn’t about to start a war — and that if Trump did plan to attack, Milley would personally warn his Chinese counterparts ahead of time," Davidson explained.

"The left and the Never Trump crowd think that doesn’t count as treason because they think Trump was never a legitimate president. They think we needed people like Milley to undermine him until he was out of office and the 'adults' were in charge again. Under the circumstances, almost anything was justified, goes the thinking."

The same "twisted logic" appears in the FBI raid, he said.

"In addition to corrupt Democrat lawyers like Marc Elias admitting on Twitter that the real purpose of the raid is to rig the 2024 election by disqualifying Trump from running, you have Never Trumpers like David French peddling the laughably naive line that 'no president is above the law' and that no one should assume the FBI is abusing its power. … But of course the FBI is abusing its power, as is Attorney General Merrick Garland. The idea that the FBI and Garland’s DOJ deserve the presumption of integrity and impartiality is only possible if you have been blissfully unaware of the events of the past six years in American politics," he said.