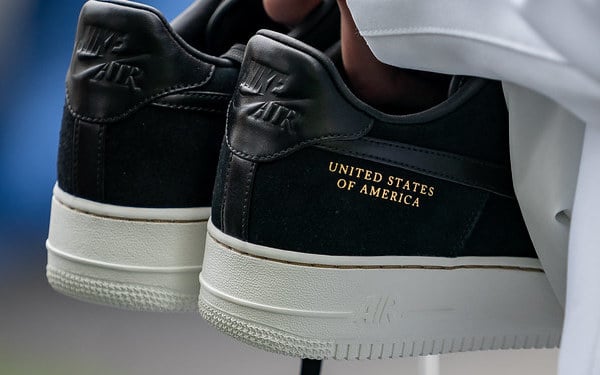 An Olympic athlete holds a pair of shoes to be presented to Joe Biden during a Team USA Olympics and Paralympics Celebration event, Wednesday, May 4, 2022, on the South Lawn of the White House. (Official White House photo by Carlos Fyfe)

Red states have fared better economically than blue states post-pandemic thanks to an influx of new businesses and growing populations of remote workers from other parts of the country, economists told the Daily Caller News Foundation.

Republican-led states have added 341,000 jobs and grown economically compared to the start of the COVID-19 pandemic, while blue states are still short 1.3 million jobs, according to The Wall Street Journal, citing statistics from the Brookings Institution. Interstate migration inflows have fueled disparities in economic growth and benefited red states because American workers, as well as major American businesses, are attracted to lower costs of living, a welcoming business environment and even certain social policies, economists tell the Daily Caller News Foundation.

Here’s the data in graphical form.

Thankfully, we’ve been recovering most of the jobs lost to COVID lockdowns, etc. The USA is almost back to Feb. 2020 levels. This chart also shows the three most-populous states.

Two have fully recovered and grown, while another lags the USA. pic.twitter.com/Bfb5ULkvER

“People move with their feet, and lots of folks are attracted to fewer taxes, regulations and government interference in daily life. Those things matter to people,” Vance Ginn, chief economist at the Texas Public Policy Foundation, told the Daily Caller News Foundation.

This process of moving with one’s feet has been reinforced by the increasing prominence of remote work allowing people to decide where to live for “financial and lifestyle reasons” rather than being anchored by where their company is headquartered, according to the WSJ.

Red states have also fared better because their lower tax rates appeal to workers, the WSJ reported. The top 10 states for new residents in 2021 averaged a maximum income-tax rate of 3.8%, with four of them charging no income tax at all, according to the WSJ. The 10 states that lost the most residents had an average tax rate of 8.0%.

Top 10 inbound vs. top 10 outbound US states in 2021: How do they compare on a variety of economic, tax, business climate, and political measures? https://t.co/CZqJkEzMSN via @AEI Americans on the move and #VotingWithTheirFeet

Business owners seeking a more favorable business environment also likely drove migration dynamics, according to the American Enterprise Institute. The averaging ranking in Forbes’ “Best States for Business” index for the 20 states with the most new arrivals last year was eight out of 50, while the average ranking for the top ten states for outbound migrants was 33 out of 50, AEI noted.

Pointing out that that Texas has attracted 256 new corporate headquarters under Gov. Greg Abbott’s leadership, a spokesperson for the governor told the DCNF that “businesses are relocating to and investing in the Lone Star State at a record pace because we’ve built a framework that allows free enterprise to flourish and hardworking Texans to prosper.”

Finally, COVID-related restrictions and particularly school closures have also encouraged many people to leave blue states, according to the WSJ. In-person educators in Florida received inquiries and higher demand for enrollments from parents “unhappy that their children’s schools in other states had moved to remote learning,” the WSJ reported, and pandemic-era movers typically flocked to places with fewer restrictions, according to a study conducted by Vanderbilt University and the Georgia Institute of Technology.

“Blue states have forced job creators and their own citizens to flee to red states because of lockdowns, high taxes, high crime caused by ‘no bail,’ among many other bad policies,” Alfredo Ortiz, president of the Job Creators Network told the DCNF.

In the twelve months between February 2021 and February 2022, 46 million people moved to a different zip code, according to the New York Post.

“Republican governors have put in the work, cutting taxes, putting money directly back into their residents’ pockets, and using innovative, pro-growth policies to keep their states’ economies booming,” a spokesperson for the Republican Governors’ Association told the DCNF.

The Democratic Governors’ Association did not respond to the DCNF’s requests for comment.