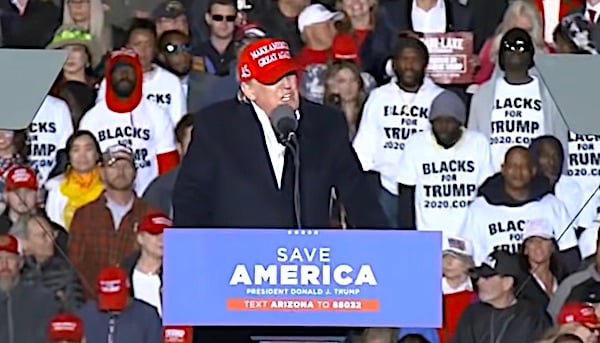 The Los Angeles Times conducted a "fake news" experiment with its readers to see if it could convince Trump supporters not to support him in the 2024 election.

Liberty Daily News reported the Times tested readers with fake stories purportedly published by either left-leaning Politico or right-leaning Breitbart to see how they would react to reading propaganda that cast the former president in a negative light.

The Times said in a story published Monday titled "Here’s one factor that might peel Trump’s diehard supporters away" that it "wanted to see if different types of news coverage about Trump could widen or shrink this electability gap."

In our experiment, we set up several different conditions, with participants divided up randomly into groups of roughly 200 people. We showed each group a different version of a fictitious news story — one that praised Trump for his work in office in 2020, one that was critical of it, and one that was neutral. We also labeled the stories as coming from either Politico or Breitbart. We tested those particular media outlets in a previous survey and found that respondents recognized them as neutral and conservative-leaning, respectively. The control group didn’t see any news story. (We debriefed the subjects later to inform them that the news story was fabricated for academic research only.)

The ruse worked on some readers, the Times said.

The results were particularly interesting when people in one of the experimental conditions saw an article from Breitbart criticizing Trump’s job performance. After reading that, some 45% of respondents said they would wave a wand to make Trump president, but just 35% wanted him to be the GOP nominee. What was a 5-point electability gap in the control condition turned out to be a 10-point gap in this one. The beneficiary of this experiment was overwhelmingly DeSantis.

While Trump beats DeSantis in the magic wand contest 45% to 21%, his advantage over DeSantis in terms of the nomination is far narrower — 35% to 28%. The intervention — a conservative publication expressing concerns about Trump — turned a coronation into an actual contest. This should be a serious worry for Trump.

The Liberty Daily's J.D. Rucker commented that corporate media outlets are "very aware that despite the lack of trust Americans have in them, the people can still be swayed if they can get their anti-Trump propaganda in front of them."