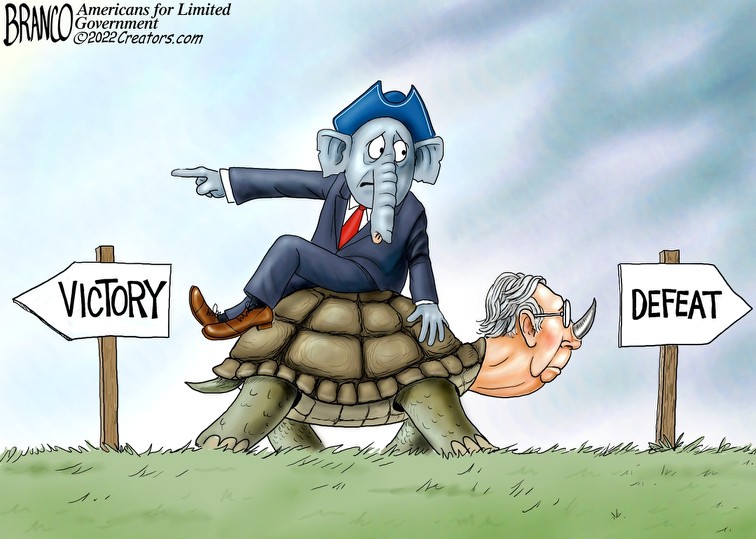 This election was supposed to represent our last chance to "save the country."

But that doesn't mean much to Mitch McConnell, the Senate minority leader.

Instead, it's the opportunity for him to save himself.

"I think there's probably a greater likelihood the House flips than the Senate. Senate races are just different," the GOP leader said recently. "Candidate quality has a lot to do with the outcome."

He added: "They're statewide. Right now, we have a 50-50 Senate and a 50-50 country, but I think when all is said and done this fall, we're likely to have an extremely close Senate, either our side up slightly or their side up slightly."

That's what he said – the highest-ranking elected Republican in the land.

Five million illegals have crossed the border in the last 18 months – a record number for that time period!

Our cities are lawless.

President Donald Trump's home was RAIDED despite constitutional prohibitions. McConnell hasn't said a word about it. He's at war with Trump.

Seventy-four percent of those polled say the country is on the wrong track. Does that mean anything?

There are three months to make a seismic change on Capitol Hill – and he isn't keen on winning one net seat and making it 51-49 Senate?

Why is he the GOP "leader"? And why would he take a dive at this point?

Because Mitch McConnell is watching out for himself.

He's not backing all Republicans. His money is supporting incumbent Sen. Lisa Murkowski in Alaska instead of Kelly Tshibaka because Murkowski does his bidding – a Democrat in Republican name only.

In the Pennsylvania U.S. Senate race, he's not inclined to support Mehmet Oz over stroke victim Democrat John Fetterman because Oz was endorsed by Trump.

McConnell is more interested in backing his running dog RINOs – and undercutting the Trump revolution.

Republicans have nominated numerous first-time candidates backed by Trump in states such as Georgia, Arizona and Ohio to run against seasoned Democratic politicians. Thankfully, McConnell's Senate Leadership Fund, a group aligned with the minority leader, recently bought $28 million worth of airtime in Ohio to support Republican nominee J.D. Vance.

Republicans need a net gain of just one seat to seize control of the Senate from the Democrats and effectively gain veto power over Joe Biden's legislative agenda from hell and nominees for top administration positions and judgeships.

But McConnell hates Trump more than Biden. Think of how often he has voted with Biden and the Deep State – and the Chinese Communists.

On Truth Social, Trump has launched a furious attack on McConnell over the GOP Senate midterm campaign.

Trump said McConnell should spend more time and money on helping Republican Senate candidates get elected and "less time helping his crazy wife and family get rich on China."

The former president also wrote that McConnell's comments about GOP Senate candidates were "an affront to honor and to leadership."

McConnell angered Trump after accepted Biden's supposed 2020 victory and condemning the former president for being "practically and morally responsible" for the Jan. 6 Capitol fracas.

Trump has previously drawn attention to McConnell and his wife Elaine Chao's business ties to China. Chao's family owns a shipping company that transports material to and from China, and a government watchdog has previously alleged that she used her transportation secretary office's staff and resources to support the business.

Mitch has got more in common with Joe Biden and his son Hunter than most people realize.

McConnell has led the Republican Party in the U.S. Senate since 2007, presiding over midterm defeats in the past.

He was first elected to the U.S. Senate in 1984. During the 1998 and 2000 election cycles, he was chairman of the National Republican Senatorial Committee. He was elected majority whip in the 108th Congress and reelected to the post in 2004.

McConnell has got to go! He's been there too long!