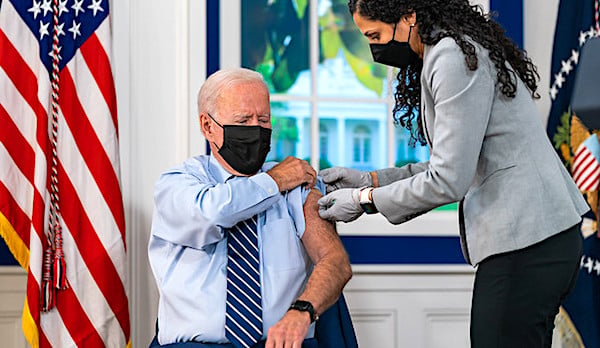 Guest hosting "Tucker Carlson Tonight," Fox News' Brian Kilmeade added a caveat to a former Democratic Party mega-donor's recitation of statistics backing his claim that COVID-19 vaccines are "the most dangerous ever created."

"We can't verify those numbers," Kilmeade said in response to Silicon Valley entrepreneur Steve Kirsch, who says he has given a total of more than $20 million to Democratic candidates and causes.

Kilmeade was reacting specifically to an unscientific sampling of people who attended conservative-libertarian businessman and talk-radio host Wayne Root's wedding that nevertheless is consistent with other data, Kirsch contends.

Kirsch said in a Substack post after the interview that he has offered Fox News the opportunity to verify his numbers.

What's more, Kirsch has had a standing offer of $1 million to the left-leaning watchdog Media Matters or anyone who is able to refute his claims.

"Note that nobody wants to bet me on any of the bets I have outstanding," he wrote. "But if I took the opposite position on each of these topics, I would be inundated with people accepting my bet."

Kirsch said his abandonment of the Democratic Party began when he started seeing friends die and be injured by the vaccines while authorities were assuring the public the shots were safe and effective.

"I started looking at the data, there was no question this vaccine is the most dangerous vaccine ever created by man," he said.

Kirsch said he could not get a "single minute" in front of any Democratic Congress member.

At Root's wedding eight months ago, with about 200 in attendance, roughly 100 attendees were vaccinated and 100 were not.

After an alarming number of his friends began dying or reporting severe illnesses, Root began keeping track an conducted a little survey. Among the vaccinated attendees of his wedding there have been 26 severe injuries and seven deaths. Among the unvaccinated, there were no injuries or deaths.

Kirsch did his own survey, of 600 readers, and matched Root's numbers closely.

"Wayne is 61 years old and only a few of his friends have died in his entire life," Kirsch wrote. "So how can 8 of his friends suddenly die, all vaccinated within an 8 month period? Seems pretty unlikely."

Kirsch noted there was a 30-fold increase in medical treatments in Germany after the vaccines rolled out. The nation's biggest health insurer said 1 in 25 clients underwent medical treatment in 2021 for COVID vaccine side effects. Since only 78% of the population is vaccinated, that's a 5% injury rate for people who were vaccinated.

Kirsch said his surveys found a 25-fold increase in injuries.

He noted the CDC hasn’t done a study like Wayne Root’s for any vaccine.