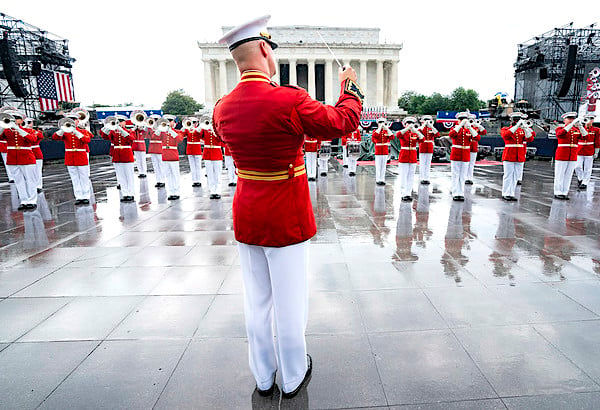 The U.S. Marine Band boasts online that it is "The President's Own."

It was founded in 1798 by an act of Congress and is the nation's oldest continuously active professional musical group.

But its description probably doesn't mean, literally, that it belongs to the president and does his wishes.

After all, it is funded by the U.S. taxpayers.

So Joe Biden's newest scandal is that he used the organization for a political rally.

Broadcaster WCSI explained the problem that developed just this week.

It described that "Biden unsettles Marine Band members by campaigning for Democrats at official event where they played."

The report cited a "source" in explaining that Biden openly campaigned on a partisan basis at the event where the band played.

"On Tuesday, Biden visited the Keystone State with the Marine Band in tow for an event where he promoted Pennsylvania Attorney General Josh Shapiro and Lieutenant Governor John Fetterman as they seek higher offices in this fall’s midterm elections," the report said.

Biden actually mixed up the offices the two candidates want, saying, "Presumptuous of me to say that. But think about doing me a favor. Please, please elect the attorney general to the Senate. Elect that big ol’ boy to be governor."

In fact, Shapiro is running to be governor, and opposes Republican Doug Mastriano, and Fetterman wants to be in the Senate, and is opposing Republican Dr. Mehmet Oz.

Typically members of the U.S. military are not allowed to be in uniform while they are appearing at a political event. And it's not routine for special organizations of the government, funded by taxpayers, to be used for political rallies.

"I was unaware active duty service members can wear the uniform at political rallies. Ask Defense Secretary Austin if there is an exception to that regulation for Democrat campaign events," one source suggested to Fox News Digital.

"Anyone with eyes to see knows that the Marine Corps just gave an in-kind contribution to Pennsylvania Democrats before the midterm elections," the commenter continued. "And they’ll do so again on Thursday in Philadelphia."

Fox reported that the Department of Defense, the White House and the Marine Band did not respond to requests for comment.

But Mike Chamberlain, of the government watchdog Protect the Public's Interest, told Fox News Digital it's "never a good look for the president, or any other government official, to appear to use taxpayer resources for partisan campaign purposes."

He pointed out that the president is exempted from the Hatch Act, that bans federal employees' engagement in partisan politics, but, "Regardless of whether there’s an official violation, we at Protect the Public’s Trust believe that officials should be held to the same standards regardless of party or ideology and would hope that the activities of President Biden are held to the same level of scrutiny as those of any of his predecessors."

The report noted Democrats condemned President Donald Trump in 2020 for making election-related remarks at the White House where the band played.