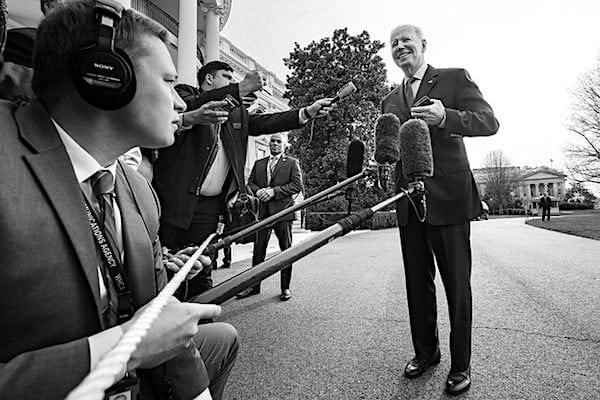 Joe Biden talks to reporters before boarding Marine One on the South Lawn of the White House, Wednesday, March 23, 2022, for his trip to Europe. (Official White House photo by Carlos Fyfe)

The editorial team at the Washington Free Beacon, in light of the FBI's latest "investigation" of President Donald Trump through an unannounced raid on his home, is promising that it will continue questioning the integrity of federal law enforcement.

"Yes, We Will Question the Integrity of Our Federal Law Enforcement Officials," headlined the editorial published this week, days after the FBI raided Trump's Florida home for documents, even though Trump confirmed he's been having discussions over the papers for weeks, and recently had complied with a government request for a new lock on the storage room.

"Since we learned of the unprecedented raid on Donald Trump’s Mar-a-Lago compound last week, millions of Americans have questioned the political neutrality of the Department of Justice. Federal law enforcement is facing a legitimacy crisis—at least in the eyes of half the country—thanks to the fake and overhyped scandals it drummed up during the Trump years," the editorial warned.

It continued, "So MSNBC’s Morning Joe invited the former FBI official Peter Strzok to assure viewers the bureau was on the level. 'Absolutely the American public should trust what the FBI is doing,' he said Monday."

But Strzok's credibility isn't the shiniest, as he was one of the key players in the conspiracy during Trump's first campaign and subsequent tenure in the White House to fabricate claims that Trump's campaign was colluding with Russia.

It turns out, evidence suggests, that whole fantasy was cooked up by Hillary Clinton, wanting to distract Americans from her own email scandal.

The editorial said, "You may remember Strzok from such FBI scandals as Russiagate, the investigation into Hillary Clinton’s use of a private email server, or his affair with FBI lawyer Lisa Page. As the man in charge of investigations into the two candidates in the 2016 presidential election, he was constantly texting Page about his hatred for Trump. Asking this man to vouch for the integrity of the FBI is like putting Bernie Madoff in charge of the Securities and Exchange Commission."

Do federal law-enforcement officials have any integrity today?
2% (1 Votes)
98% (61 Votes)

But the commentary noted Strzok's attitude is a microcosm of what the mainstream media does with Trump.

And it noted there's a lot that's unknown about the FBI raid on Trump's resident – the first ever such event involving an American president.

"Except, we are told, that the integrity of our law enforcement officials shall not be questioned!" the editors wrote, citing a claim from the Washington Post that, "The FBI is not the enemy."

But history has proven that to be disputable, they noted.

For example, a later review of FBI campaigns against President Trump led to the nullification of two of the four warrants used against Trump, and "a scathing inspector general's report that 'identified multiple instances' in which the factual asserts the bureau made … 'were inaccurate, incomplete, or unsupported by appropriate documentation.'"

"Perhaps, when we know all the facts, we will find that the FBI raid on Trump’s Florida home was justified. Until then, we reserve our right to question the integrity of the federal law enforcement officials who have demonstrated their willingness to behave like political hacks and abuse the power with which they are entrusted to punish their political opponents," the team wrote.