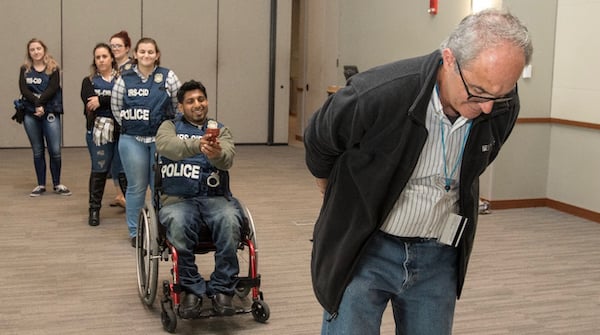 In the wake of the passage of the massive Democratic Party spending bill that expands the IRS by 87,000 agents, a Republican congressman has released visual evidence that only increases the cause for concern among American taxpayers.

"These are not auditions for the next Police Academy sequel. This is an actual IRS recruiting program," wrote Rep. Thomas Massie, R-Ky., on Twitter.

These are not auditions for the next Police Academy sequel. This is an actual IRS recruiting program: pic.twitter.com/KUFqxmbDpW

This one shows the recruits acting out a situation in which they enter a gymnasium to take suspects into custody, with one recruit declaring "you're under arrest for conspiracy":

This is not doctored. pic.twitter.com/EkIDbWLZ9N

In case you thought the IRS needed 87,000 more agents to help you with your tax returns and audit billionaires, watch this: Highlights from the IRS Adrian recruiting project.

President Biden and his Democratic allies have insisted there won't be any "new audits" of people making under $400,000 a year to go with the 87,000 new agents and the $80 million in taxpayer funds allotted to the agency.

However, the group Americans for Tax Reform points out that a preliminary assessment by the Congressional Budget Office found that at least $20 billion of new revenue from increased IRS audits will come from individuals earning less than $400,000 per year.