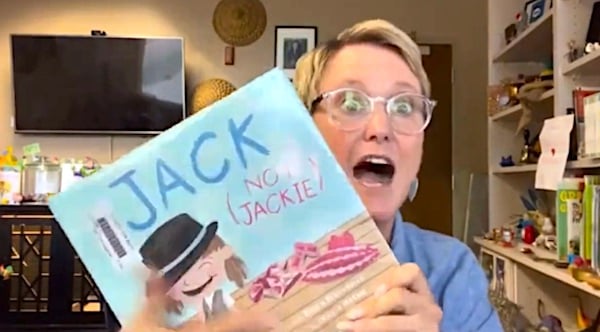 An elementary school principal issued an apology Friday after promoting a book about a transgender child to students as young as five years old.

Stacy DeCorsey, principal of Excelsior Elementary School in Excelsior, Minnesota, suggested kindergarten through second grade students read “Jack (Not Jackie),” a story about a young girl who realizes she prefers to act like a boy, according to a YouTube video. DeCorsey then issued an apology on Facebook for suggesting the book after it “struck a nerve in the community,” and since deleted the original video.

“One of the books I spoke about specifically, which has struck a nerve in our community, was intended to support our transgender students who are often overlooked and misunderstood in schools,” DeCorsey said in the video. “Please know this is not a required reading for students, it was simply meant to be a suggestion for families who are looking for these types of resources.”

DeCorsey said the “phenomenal read” would be available in the schools‘ media center for the 2022-2023 school year.

“Jack (Not Jackie)” is a children’s picture book about a sister accepting her sibling, Jackie, who realizes she would rather be called Jack and do “boy-like” activities like play in the mud and wear boy clothing.

The book is about a toddler becoming transgender and cross-dressing. pic.twitter.com/FB57rnxgSg

“I want to assure all parents that this message in no way takes away from how strongly I believe it is for all students to feel as though they belong, that they are welcomed and that they are connected to our school community. No matter their gender, their background or their ability,” DeCorsey said in the apology video.

DeCorsey and Excelsior Elementary School did not immediately respond to the Daily Caller News Foundation’s request for comment.