We have a friend who's a little bit on the paranoid side. He always feels like he has a great big bull's-eye on his back regarding government persecution. There's no reason for him to feel this way, because he's one of the most upstanding and blameless people I've ever met. He's a fine law-abiding citizen, honest as the day is long, active in his church and community, has never cheated anyone or stolen anything, always pays his taxes in full, and he's well liked. But he still walks around feeling like he has a bull's-eye on his back.

I'm beginning to understand how he feels. So are hundreds of millions of other law-abiding American citizens as we brace ourselves for the inevitable tsunami of audits from the newly weaponized Internal Revenue Service.

Yes, American citizens will soon face 87,000 new IRS agents thanks to the passage of the laughably titled "Inflation Reduction Act" in which the expanded IRS will receive $80 billion in new funding over the next nine years. A significant number of these agents will be part of the IRS Criminal Investigation Unit, courtesy of Your Tax Dollars. Columnist David Harsanyi calls this the biggest expansion of the police state in U.S. history.

Who does the IRS plan to target? According to Rep. Kevin Brady, R-Texas, ranking member of the House Ways and Means Committee, of the projected 1.2 million new audits the IRS will conduct each years, over 710,000 (nearly 60%) will fall on Americans who earn less than $75,000 per year. (Side note: Welp, that covers literally every one of my acquaintance …)

A chart from the House Ways and Means Committee further breaks down the potential audits:

It's worth noting the highest number of audits will be targeting the poorest Americans, the ones with the fewest resources and least ability to fight unfair claims. Isn't that nice? In an unrelated coincidence, the IRS has a history of targeting conservatives (see this and this).

It should be pointed out that White House press secretary Karine Jean-Pierre stated Americans making less than $400,000 a year would not be targeted for new audits under the Democrats' plan. Biden and IRS Commissioner Charles Rettig have made similar statements. Who are you gonna believe? I'll let you decide.

Now 87,000 sounds like a big number. But how big? Take a look at the meme below to get an excellent visualization. 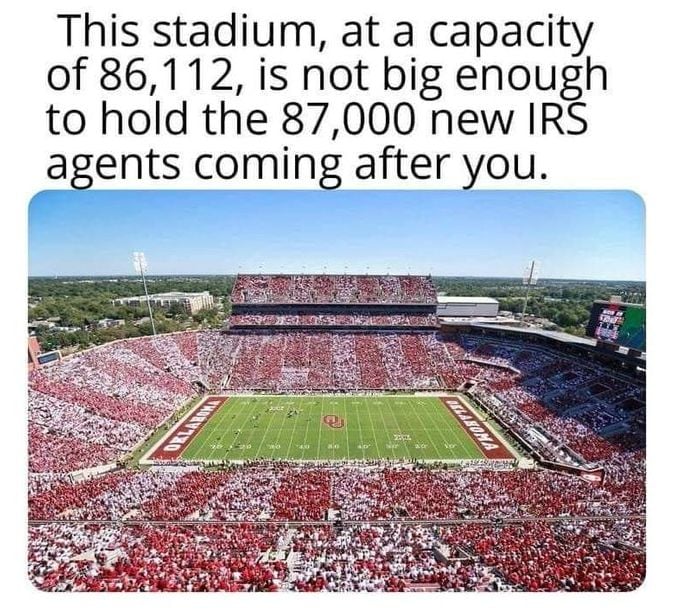 Ironically, the "bull's-eye" feeling may be more literal than we realize. That's because the IRS is being weaponized in a very literal sense. Recent job postings stipulate a number of requirements, including the chilling bullet point that agents must "carry a firearm and be willing to use deadly force, if necessary."

Deadly force. Against American citizens. Over taxes. Journalist M. Dowling noted, "[The IRS wants] to investigate in a way that 'fosters confidence in the tax system and compliance with the law.' Sure, because nothing says 'confidence' like a gun held by an agent who is willing to use deadly force."

Supposedly, these sniper IRS agents will be used to combat "rising threat of Sovereign Citizens and Trump supporters that oppose taxation." But we've seen how fluid government definitions are these days, when words like "raid" and "recession" are redefined at whim. I'm guessing that every Trump supporter will be rebranded as "sovereign citizens" who "oppose taxation" so the IRS can justify persecuting them. Remember, we have FBI officials literally padding statistics to reclassify cases as "domestic violent extremism" to boost case numbers. Why should the IRS be any different?

In short, the IRS is being transformed into a highly trained paramilitary force with low- and middle-income peasants as the opposition. Already IRS agents are simulating assaults on suburban homes. Awww, doesn't that just give you the warm fuzzies?

Of course, a Democratic senator from Maryland named Ben Cardin condescendingly explained in an interview that American taxpayers should not worry about the IRS expansion. Why? In his words, "The auditing is going to be focused on those of high income, the large corporations etc., so there's no reason to be fearful and if you paid your taxes and comply with our laws, you should want to make sure everyone else does."

Awww, back to the warm fuzzies. And to think we were worried.

But consider this gem from American Thinker: "Buried in the wording [of the Senate's draft Inflation Reduction Act] is a paragraph giving the Secretary of the Treasury the ability to hire directly into the competitive service without regard for current laws that mandate publicly announcing available competitive service openings. The Secretary can ignore all federal laws that give hiring preference to veterans, the disabled, former employees (that would include those fired for not taking the co-vax), military spouses, Peace Corps volunteers, etc. That's one way to make sure only those who meet a political smell test get to participate in this new IRS enforcement program." [Emphasis added.]

In other words, don't look for friendly conservative faces amidst these new IRS agents. The hiring practices will weed them all out.

Remember our paranoid friend? Most of his concerns spring from being politically conservative in the face of a hostile government. It's become abundantly clear in the last few years that we have a two-tiered justice system in which the elites are innocent until … well, innocent no matter what, and the peasants are guilty until … well, they're guilty.

Remember this: "When one political party weaponizes the law in order to crush their main opposition, the legitimacy of the government disappears."

There's an old saying, "Just because you're paranoid doesn't mean they aren't after you." Millions of innocent Americans are about to discover the truth in that statement.

I guess our paranoid friend is right to be concerned after all.

Patrice Lewis
Patrice Lewis is a WND editor and weekly columnist, and the author of "The Simplicity Primer: 365 Ideas for Making Life more Livable." Visit her blog at www.rural-revolution.com.
Conservatives have become the enemy
The late great city of Seattle
Meet the Hermits
We peasants aren't listening! The elite media's echo chamber
What is the future of American public education?
See more...