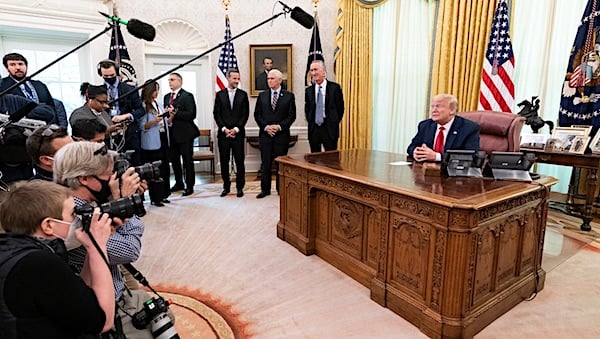 President Donald J. Trump, joined by Vice President Mike Pence, meets with Gilead CEO Daniel O'Day Friday, May 1, 2020 in the Oval Office of the White House, to announce that Gilead now has a EUA from the Food & Drug Administration for the drug Remdesivir and to start immediate clinical trials in the battle against COVID-19. (Official White House photo by Joyce N. Boghosian)

Democrat politicians and pundits were chortling with glee on Tuesday, only hours after the FBI raided President Donald Trump's Florida home in a dispute over paper records.

Finally, they claimed, they had him. 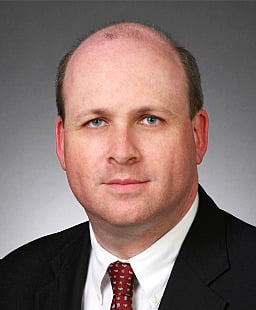 "Russian collusion hoax guy" Marc Elias reportedly let slip the "REAL reason" for the raid by going on social media and citing federal law that anyone convicted of certain charges would "forfeit his office and be disqualified from holding any office under the United States."

This, he suggested, is what Democrats have wanted ever since their nominee in 2016, Hillary Clinton, lost big.

After all, House Speaker Nancy Pelosi failed twice trying to impeach and remove Trump, including once after he already had left office. Then she's had her scripted and staged Jan. 6 riot investigation going on television since.

A commentary at Twitchy said Elias "had to let the cat out of the bag" and called the raid a "blockbuster in American politics."

But Elias even admitted the possibly downfall of his arguments, conceding that the "qualifications" to be president are "set in Constitution" not in federal law.

And constitutional expert Jonathan Turley explained that Trump's enemies immediately used the situation to claim "the ability to use the charge to disqualify Trump from future office."

After all, he's the leading GOP candidate for the nomination for president in 2024, and is eligible to hold office.

Turley explained the idea that Trump would be prevented from running was an "enticing possibility highlighted by Marc Elias, Hillary Clinton’s campaign lawyer who was a critical player in pushing the false Russian collusion claims in the Steele dossier."

Turley explained, "In addition to accusations that he may have lied about the funding of the Steele dossier, Elias has been sanctioned in court for his conduct."

But he only led a troop of leftists making similar claims – that Trump now could not run again.

"Former federal prosecutor Harry Litman even suggested that this could be the actual plan of the Justice Department to end Trump’s political career: 'So this could be the whole enchilada in terms of DOJ resolution,'" Turley wrote.

"Consider that culinary-legal analysis for a second. The claim is that the Justice Department may be actively seeking to use a charge to block Trump as the real motivation for this raid and possible charge. There is not a hint of concern over the FBI being used to achieve such a political purpose. That is putting aside the fact that, unless there is evidence of a 'willful and unlawful' effort to conceal or retain such material, the FBI could end up an enchilada short of a combination plate for prosecution," he explained.

"There is also a significant constitutional hurdle facing this latest means of barring Trump from office. This is not the first time that this disqualification argument has been made and scholars like Seth Tillman have previously raised constitutional objections to it. (Professor Josh Blackmun also has a column on this issue).

"The problem is that the law would add a qualification or condition that is not stated in the Constitution. There are constitutional ways to impeach a president or to bar a former president from future office. The mishandling of official records is not one of them," he said.

Turley continued, "There is ample reason to doubt that the presidency would be deemed barred by statute in this fashion. What would not be in doubt is how such novel claim of disqualification would be received by millions of citizens already skeptical of the motivations of both the Biden administration and specifically the FBI.

"The basis and even the motivation of this raid will become clear in time, including whether there is evidence of willful and unlawful conduct by the former president. However, whatever this raid produces, this 'enchilada' will likely be hard for most judges to swallow as a way to keeping Trump off the ballot in 2024."

Turley explained prosecutions for mishandling federal papers are extremely rare, and even former Clinton Clinton National Security Adviser Sandy Berger who was found to have secretly stuffed classified material into his pants and socks to remove them from a secure facility was only accused of a misdemeanor.