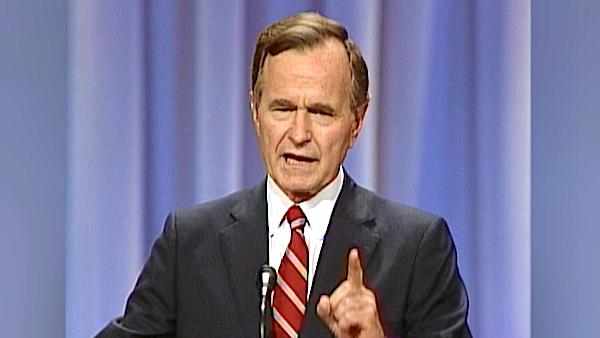 President Biden repeatedly has promised not to raise taxes on the middle class, but experts say the Democrats' new "inflation bill" effectively does just that.

Most recently, Biden declared in a statement after the Senate passed the Inflation Reduction Act on a 51-50 party-line vote that the legislation "does not raise taxes on those making under $400,000 a year – not one cent."

In June 1990, however, amid a slowing economy, Bush gave in to the Democrats and agreed to what he called "tax revenue increases" as part of a plan to reduce the deficit.

Three decades later, history is poised to repeat itself, with the de facto tax hikes on those making less than $400,000 buried in the Inflation Reduction Act.

Douglas Holtz-Eakin, president of the American Action Forum, explained to Just the News that while there are no income or sales taxes in the bill directly levied on middle-income Americans, the legislation creates a 15% minimum tax for corporations.

And, according to Congress's Joint Committee on Taxation, it will amount to a $313 billion tax hike from 2023 to 2031 that will result in higher prices, a reduction of payments to shareholders or lower wages.

Regardless, Holtz-Eakin said, "those most affected, taking on the economic burden, will be people making less than $400,000."

The hill also includes about $80 billion in additional funding for the IRS to hire 87,000 more agents, allowing for more tax audits. That will increase total tax collections by about $200 billion 2023 to 2031, the Congressional Budget Office has projected.

Significantly, every Democrat voted against a Republican amendment that would have restricted additional IRS audits to those who make more than $400,000.

Preston Brashers, senior analyst for tax policy at the Heritage Foundation, told Just the News that according to figures from the CBO and the Joint Committee on Taxation, taxpayers with adjusted gross incomes below $75,000 would ultimately pay an estimated $136 billion, or about 26%, of new revenues from the bill's corporate minimum tax and the IRS hiring spree.

The legislation's increase of taxes on oil and natural gas by billions will raise energy prices, warns Americans for Tax Reform. And inflation itself is a tax, points out Holtz-Eakin, that mostly hurts middle and working class Americans.

"These point estimates are statistically indistinguishable from zero, thereby indicating low confidence that the legislation will have any impact on inflation," the Penn study said.

Currently, inflation, which is at its highest levels in four decades, will cost families about $4,000 this year. And that does not include projected additional tax costs in the Biden bill.