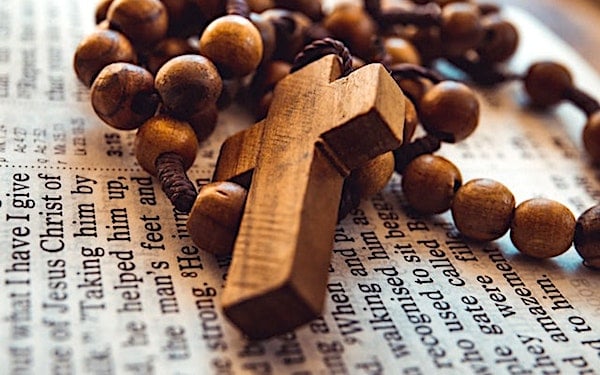 (Photo by James Coleman on Unsplash)

Rosary beads, an integral part of life for many faithful Catholics, are being demonized by a writer for the Atlantic as an "extremist symbol," and "Fox & Friends Weekend" co-host Rachel Campos-Duffy is alarmed.

Responding to an article published Sunday by Daniel Panneton, she explained, "The first thing that authoritarians try to do is to delegitimize and ban religion because it is an existential threat against the state. And I think that’s what you have here, and I think what they’re trying to do, and we’re seeing more articles like this.

"This seems comical, but we’re seeing more and more articles trying to associate people who are faithful, especially those who adhere to more orthodox or traditional interpretations of faith, as somehow being right-wing extremists, white nationalists, fringe. And I think we ought to be very careful of that…"

At BizPacReview, she explained it's just another example of how religious liberty is under attack.

Co-host Doocy had raised the issue of the article, which originally was headlined, "How the Rosary Became an Extremist Symbol," and which noted, "Just as the AR-15 rifle has become a sacred object for Christian nationalists in general, the rosary has acquired a militaristic meaning for radical-traditional (or 'rad trad') Catholics. On this extremist fringe, rosary beads have been woven into a conspiratorial politics and absolutist gun culture. These armed radical traditionalists have taken up a spiritual notion that the rosary can be a weapon in the fight against evil and turned it into something dangerously literal."

He continued, "Their social-media pages are saturated with images of rosaries draped over firearms, warriors in prayer, Deus Vult ('God wills it') crusader memes, and exhortations for men to rise up and become Church Militants. Influencers on platforms such as Instagram share posts referencing 'everyday carry' and 'gat check' (gat is slang for 'firearm') that include soldiers’ 'battle beads,' handguns, and assault rifles. One artist posts illustrations of his favorite Catholic saints, clergy, and influencers toting AR-15-style rifles labeled SANCTUM ROSARIUM alongside violently homophobic screeds that are celebrated by social-media accounts with thousands of followers."

"Who knew that you and I were both right-wing extremists for having a rosary," Campos-Duffy told her co-host.

She explained the messaging is part of a coordinated assault by the left that is aimed at hurting religion and faith.

Panneton, a Canadian writer who describes himself in his Twitter bio as an "online hate researcher," states, "The 'battle beads' culture of spiritual warfare permits radical-traditional Catholics literally to demonize their political opponents and regard the use of armed force against them as sanctified. The sacramental rosary isn’t just a spiritual weapon but one that comes with physical ammunition."

Responded Campos-Duffy, "And it’s very interesting that they are trying to associate it with violence. If you look at the aftermath of [overturning] Roe v. Wade, what kind of deep projection this article is involved in. It was the other side, the pro-abortion side, that was attacking churches, defaming Catholics, going in front of their churches, and doing all kinds of obscene things, and attacking religion. And it was Catholics and other Christians who were just praying for an end to abortion…"

She suggested, "We should understand that in this country and around the world, Christianity and faith in general is under attack all over the world. And we should be very protective of our religious liberties and push back against this kind of bigotry against Christians."

Panneton had claimed, "Militia culture, a fetishism of Western civilization, and masculinist anxieties have become mainstays of the far right in the U.S.—and rad-trad Catholics have now taken up residence in this company. Their social-media accounts commonly promote accelerationist and survivalist content, along with combat-medical and tactical training, as well as memes depicting balaclava-clad gunmen that draw on the 'terrorwave' or 'warcore' aesthetic that is popular in far-right circles. Like such networks, radical-traditional Catholics sustain their own cottage industry of goods and services that reinforces the radicalization. Rosaries are common among the merchandise on offer—some made of cartridge casings, and complete with gun-metal-finish crucifixes."

A commentary at The Gateway Pundit explained the article "went on to attack people who wish to defend their church and family."