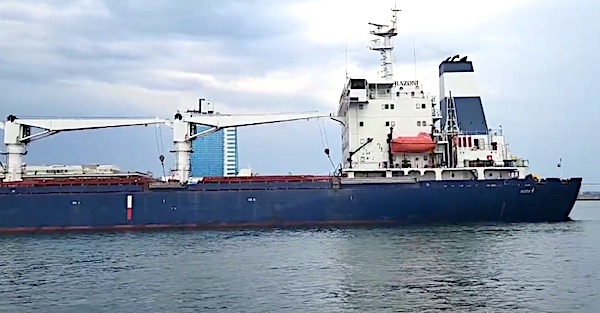 The Rozoni’s departure represents the end of a five-month blockade that contributed to rising global food prices and a “crisis of food availability,” with millions of people facing near-starvation in the near future, according to a UN report from July. Ukraine is one of the world’s largest wheat producers, but Western sanctions on Russia, heavy fighting along the Black Sea coast and mines placed by both sides in the Black Sea to target the others’ seaborne troops have prevented exports, Reuters reported.

Ukraine’s foreign minister, Dmytro Kuleba, said the departure represented “a day of relief for the world, especially for our friends in the Middle East, Asia, and Africa, as the first Ukrainian grain leaves Odesa after months of Russian blockade.”

As part of the agreements signed with the UN and Turkey on July 22, Russia promised to cease attacks on three major Ukrainian ports and allow for safe passage of Ukrainian ships through heavily-mined Black Sea waters for roughly 22 tons of embargoed Ukrainian grain. However, Russia continued attacks on Ukraine’s agricultural industry, allegedly targeting military infrastructure at Odessa a day after the agreement and jeopardizing future grain exports, according to Voice of America.

Russian shelling at the port of Mykolaiv, which does not fall under the export agreement, Sunday killed a Ukrainian agricultural tycoon who had worked to expand and modernize Ukraine’s agricultural industry, Reuters reported. Presidential adviser Mykhailo Podolyak called Oleksiy Vadatursk’s killing a “terror attack” and accused Russia of deliberately targeting the businessman, Newsweek reported.

Ukrainian President Volodymyr Zelenskyy called his death “a great loss for all of Ukraine,” Reuters reported.

The Razoni will dock in Istanbul for a four-way joint inspection before continuing its journey to Lebanon, Reuters reported. As many as 17 ships, loaded with 600,000 tons of agricultural products, remain docked in Ukrainian ports, but Ukrainian officials say they will soon embark.

Together, Russia and Ukraine supply a third of the world’s wheat, according to Reuters. Western sanctions, heavy fighting along the Black Sea coast and mines placed by both sides in the Black Sea to target the others’ seaborne troops have prevented exports.

The July 22 agreement also allows for Russia to export its wheat and fertilizer, also in short supply worldwide, according to the Associated Press.

The Ukrainian and Russian foreign ministries did not immediately return the Daily Caller News Foundation’s request for comment.